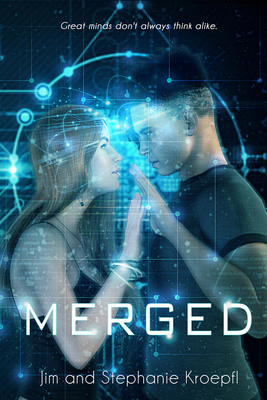 Seven of our country’s most gifted teens will become Nobels, hosts for the implantation of brilliant Mentor minds, in an effort to accelerate human progress. But as the line between what’s possible and what’s right, draws ever blurrier, the teens discover everything has a cost. Scientists have created an evolved form of living known as Merged Consciousness, and 16-year-old Lake finds herself unable to merge with her Mentor. Lake, the Nobel for Chemistry and Orfyn, the Nobel for Art, are two from among the inaugural class of Nobels, and with the best intent and motivation. But when Stryker, the Nobel for Peace, makes them question the motivation of the scientists behind the program, their world begins to unravel. As the Nobels work to uncover the dark secrets of the program’s origins, everyone's a suspect and no one can be trusted, not even the other Nobels. As the Mentors begin to take over the bodies and minds of the Nobels, Lake and Orfyn must find a way to regain control before they lose all semblance or memory of their former selves.

"An experiment in immortality is not what it first appears.The Darwinians, a group of scientists, have selected six gifted teenagers, each representing a Nobel Prize discipline—chemistry, physics, physiology, literature, economics, and peace. The chosen teens will merge their consciousnesses with those of brilliant scientists through a process of brain implantation. At risk of losing their grant, the Darwinians add one last Nobel, as their subjects are called, this one for art. The selected teens seemingly go into the project with the best of intentions, but not everything proceeds as planned. The story focuses on three of the Nobels: Orfyn, the Nobel for art; Stryker, the Nobel for peace; and Lake, the Nobel for chemistry. When Lake is not able to fully merge with her scientist Mentor, the teens start questioning the process and motivation behind the program. This debut by a husband-and-wife team is an enjoyable read that nicely layers science and mystery with teen angst and romance. Although not all the teen Nobels are explored equally in depth, readers learn enough of everyone's backstories to understand all the pieces while leaving more to be discovered in sequels. The book follows a white default, and although there is some diversity, unfortunately it is handled in a superficial way, and brown-skinned Orfyn is somewhat stereotypically portrayed as an urban graffiti artist living in an orphanage. Recommended. (art and science references) (Science fiction. 13-adult)" — Kirkus Reviews

Jim and Stephanie Kroepfl are a husband-and-wife team who write stories of mystery and adventure from their cabin in the Colorado Rocky Mountains. When they aren’t dodging moose, their story ideas appear during their walks with their dog, who far prefers chasing balls to plotting novels. Jim and Stephanie are world travelers who seek out crop circles, obscure historical sites and mysterious ruins. They live in Grand Lake, Colorado.
Loading...
or support indie stores by buying on