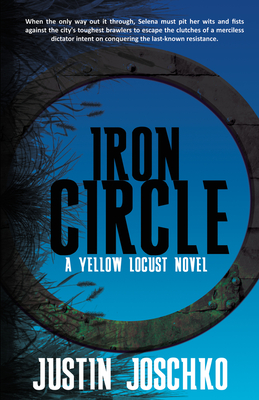 The path west is long, but despite Selena’s progress, New Canaan is never far enough behind her. It was there that her parents were killed, forcing her and her little brother Simon to flee the tyrannical state. Now, New Canaan wants control over every last inch of America-That-Was. Only the Republic of California can stand against it—but not without the data stick in Selena’s pocket, rumored to contain vital information about New Canaan’s deadly new weapon.

As winter closes in, Selena races south in search of an open passage to the coast. She must pass through Nuevo Juarez, where a ruthless leader named Thorin has seized power. Selena runs afoul of Thorin’s men and is separated from her brother, captured, and auctioned off at the city’s thriving slave market.

Her only way out is through the Iron Circle, a fighting ring where the city’s most fearsome warriors pit their skills against one another. As the populace and Thorin watch Selena rise through the ranks, Selena earns a reputation she doesn’t want and the attention of man with the power to destroy her and what’s left of America-That-Was.

Justin Joschko is a writer whose work has appeared in newspapers and literary journals across Canada. He is the author of Yellow Locust. He lives in Ottawa, Ontario.
Loading...
or support indie stores by buying on