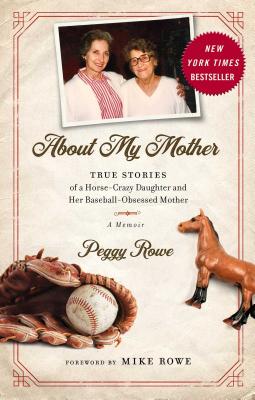 True Stories of a Horse-Crazy Daughter and Her Baseball-Obsessed Mother: A Memoir

…It is not, however, a book written by me. True, I did write the foreword. But it doesn’t mean I’ve written a book about my mother. I haven’t. Nor does it mean my mother’s book is about her son. It isn’t. It’s about my grandmother. And my mother. Just to be clear.—Mike

A love letter to mothers everywhere, About My Mother will make you laugh and cry—and see yourself in its reflection. Peggy Rowe’s story of growing up as the daughter of Thelma Knobel is filled with warmth and humor. But Thelma could be your mother—there’s a Thelma in everyone’s life. She’s the person taking charge—the one who knows instinctively how things should be. Today, Thelma would be described as an alpha personality, but while growing up, her daughter Peggy saw her as a dictator—albeit a benevolent, loving one. They clashed from the beginning—Peggy, the horse-crazy tomboy, and Thelma, the genteel-yet-still-controlling mother, committed to raising two refined, ladylike daughters. Good luck.

When major league baseball came to town in the early 1950s and turned sophisticated Thelma into a crazed Baltimore Orioles groupie, nobody was more surprised and embarrassed than Peggy. Life became a series of compromises—Thelma tolerating a daughter who pitched manure and galloped the countryside, while Peggy learned to tolerate the whacky Orioles fan who threw her underwear at the television, shouted insults at umpires, and lived by the orange-and-black schedule taped to the refrigerator door.

Sometimes it takes a little distance to appreciate the people we love.

Peggy Rowe lives in Baltimore, Maryland, with John, her husband of sixty-one years. Both educators, they raised three sons. Peggy has been writing for most of her adult life and has two New York Times bestsellers to her credit—both of which were published after the age of eighty. Now eight-four, she is living the good life in a retirement community where material abounds. Peggy continues to write every day of her life—preferably without wearing jewelry or a bra.

Mike Rowe is best known as the executive producer and host of the hit shows Dirty Jobs, Somebody’s Gotta Do It, and Returning the Favor, for which he won an Emmy. He also hosts the podcast The Way I Heard It, a collection of short stories for the “curious mind with a short attention span.” As CEO of the mikeroweWORKS Foundation, Mike has led the effort to close America’s widening skills gap and facilitated the granting of millions of dollars in work ethic scholarships.
Loading...
or support indie stores by buying on