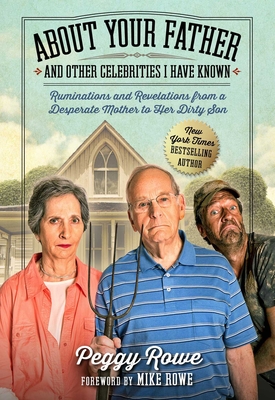 About Your Father and Other Celebrities I Have Known

Ruminations and Revelations from a Desperate Mother to Her Dirty Son

Peggy Rowe is at it again—this time giving a hilarious inside look at growing up Rowe, both before and after Mike’s rise to fame.

Since the day they said, “I do,” Peggy’s previous “doting” lifestyle met with her husband John’s minimalist ways and became the backdrop for years of adventure and a quirky sense of humor because of their differences. From thoughts of wearing headlamps in the house to save energy, to squeezing out the last drop of toothpaste with a workbench vise, Peggy learned to pick her battles and celebrate the hilarity in each situation.

Once their boys were born, woodstove mishaps and garbage dumping tales were the seed for Mike’s obsession with doing dirty jobs and the comical presence he is known for today.

As Mike rose to fame, Peggy was his biggest fan—who gave motherly advice and constructive criticism, of course. She baked cookies for Mike to take to Joan Rivers for a Christmas party hostess gift, and even wrote fan letters under faux names and mailed them from different cities to Mike’s producer.

By the time Mike hits it big, Peggy and John retire to face more adventures, with a lightning strike in their condo, an elderly friend who ate marijuana leaves, and entering into celebrity status by making Viva paper towel and Lee jeans commercials, plus so much more.

Peggy’s stories relive the details that intrigue and entertain old and new fans alike. So if you want a bigger, even funnier take on the Rowe family, About Your Father and Other Celebrities I Have Known delivers.

Peggy Rowe lives in Baltimore, Maryland, with John, her husband of sixty-one years. Both educators, they raised three sons. Peggy has been writing for most of her adult life and has two New York Times bestsellers to her credit—both of which were published after the age of eighty. Now eight-four, she is living the good life in a retirement community where material abounds. Peggy continues to write every day of her life—preferably without wearing jewelry or a bra.

Mike Rowe is best known as the executive producer and host of the hit shows Dirty Jobs, Somebody’s Gotta Do It, and Returning the Favor, for which he won an Emmy. He also hosts the podcast The Way I Heard It, a collection of short stories for the “curious mind with a short attention span.” As CEO of the mikeroweWORKS Foundation, Mike has led the effort to close America’s widening skills gap and facilitated the granting of millions of dollars in work ethic scholarships.
Loading...
or support indie stores by buying on