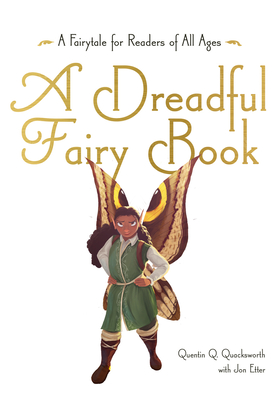 Readers, beware: what you hold in your hands is a dreadful fairy book.

I wish I were narrating almost any other fairy story, but alas, this is my lot. Whatever expectations you have of delightful and whimsical fairies are sure to be disappointed. There are certainly fairies, but most are not proper fairies. Some who are supposed to be nasty are disappointingly nice, while some who should be kind and helpful are disconcertingly surly, dishonest, and generally unpleasant company.

Our heroine is, perhaps, the worst offender—a sprite more interested in books than carefree games, who insists on being called Shade. She is on a quest, albeit with rather questionable companions, to find a place her outré self can call home. A place of companionship, comfort, and, most importantly, positively filled with books.

The author of this dreadful tale, one Mr. Jon Etter, grew up in his local library in Forrest, Illinois (Population 1200 and some dogs) and eventually migrated north to Wisconsin, where he has taught high school English for the past twenty years.

When not teaching or attempting to domesticate his two children, Jon has written a number of proper tales—mostly fantasy—for The London Journal of Fiction, The Singularity, The Great Tome of Forgotten Relics and Artifacts, and other venues. A Dreadful Fairy Book is his first novel for kids and he’s loved every minute of working on it that wasn’t spent with Quentin Q. Quacksworth, whom Jon describes as “the opposite of fun,” although he does enjoy how annoyed Quacksworth gets when referred to as “Triple Q” or “Q Cubed.”

In his storied, 43-year career as a professional narrator, Quentin Quigley Quacksworth has worked on many wonderful, proper pieces of literature. His greatest regret, professional or personal, is his involvement with Jon Etter, whom he describes as “a pugnacious purveyor of puerile prose,” and A Dreadful Fairy Book, which he strongly urges publishers, parents, teachers, and librarians to keep out of the hands of children.