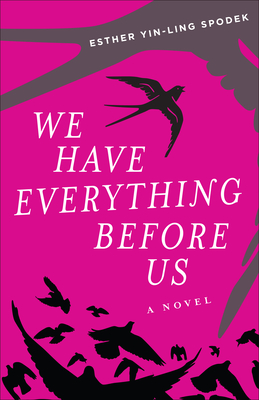 We Have Everything Before Us (Paperback)

A summer party and a thunderstorm bring relationships into focus, as three women must decide how to move forward in this humorous and dramatic tale of intersecting lives. Eleanor is bored with her two sons and a husband who ignores her when she reconnects with Phil, a man she knew in high school. Phil’s wife is leaving him because of his philandering, most recently with the younger Sarayu. Eleanor’s friend Kaye doesn’t approve of Phil, but she has her own problems: too much drinking and a fraught relationship with her husband and daughter, who are building a boat together. Poignant and acutely observed, We Have Everything Before Us is unsparing yet sympathetic as it details the unsettling junction of illusions and reality.

Esther Yin-ling Spodek is a graduate of the University of Virginia and received her MFA in Creative Writing from Indiana University. Her short stories have appeared in literary magazines and she taught composition at Columbia College in Chicago. She currently lives in Evanston, Illinois, with her husband and border collie.

Praise For We Have Everything Before Us: A Novel…

"Watch yourself. Esther Yin-ling Spodek has peeked in your windows, spied on your neighbors and hacked your email—and she’s turned her wry observations into a sharply etched first novel, We Have Everything Before Us. Read it and weep (and smile in recognition). You’ve been warned." —Sharon Fiffer, Author of Imagining America and the Jane Wheel mysteries

"It drops you right into the lives of Eleanor, Kaye and Sarayu and Phil. It’s almost like looking at a traffic accident and you can’t look away. These characters are very human with all the flaws included. It is described as "unsparing yet sympathetic" and that is truly how it shows you these people’s lives. It was hard to have it end because you get so involved in their lives and want to know more of what will happen. Fast paced and hard to put down." —Suzanne Christensen, Librarian

"In Esther Ying-ling Spodek’s sparkling debut novel, hell is other people—and sparrows. Bored with her life and lot, Eleanor’s thoughts wander to a high school flame. Things come to a head—as things are wont to do in this affluent Chicago suburb— at a backyard barbeque. Blue skies darken, and the violence of a summer storm lays bare the self-doubts and self-delusions of the very real characters who inhabit this darkly comic send-up of everyday American life." —Ian Morris, Author of Simple Machines and When Bad Things Happen to Rich People

"Esther Yin-ling Spodek’s We Have Everything Before Us is funny and sad and full of insight about love, loneliness and infidelity. After this impressive debut novel, I can’t wait to see what Spodek writes next." —Christopher John Farley, Author of Around Harvard Square
or support indie stores by buying on
Copyright © 2020 American Booksellers Association