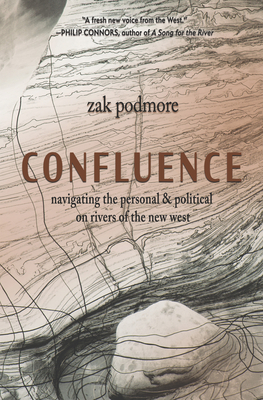 Navigating the Personal & Political on Rivers of the New West

"Podmore's essays resemble Ralph Waldo Emerson and Henry David Thoreau with an extra dose of social, racial and political analysis."
--ARIZONA DAILY SUN "Deeply researched and deeply personal . . . Podmore's grief and his love of the landscape run through the book, lyrical and raw."
--PACIFIC STANDARD "Podmore's writing is as personal as it is hard-hitting, leaving an impact with its thoughtfulness and depth of reporting."
--CANOE & KAYAK "These essays combine an adventurer's soul with a philosopher's head. Kudos to Zak Podmore, a fresh new voice from the West."
--PHILIP CONNORS, author of A Song for the River "An ambitious, adventurous ride. The words themselves move like rivers--from choked, bucking rapids to languid flat water, to eddies swirling with uncomfortable truths... Zak Podmore has unleashed the kind of storytelling that will inspire the next great wave of ecological activism--and not a moment too soon."
--AMY IRVINE, author of Desert Cabal "The publication of Confluence marks the arrival of an important new voice in the West."
--DAVID GESSNER, author of Ultimate Glory and All the Wild that Remains "Finally Finally a young writer who deeply feels and understands the power of water, the power of emotion, the power of words. Confluence is a profoundly personal and philosophical look at Western rivers and their value to all souls."
--ANDY NETTELL, Back of Beyond Books In the wake of his river-running mother's death, Zak Podmore explores the healing power of wild places through a lens of grief and regeneration. Visceral, first-person narratives include a canoe crossing of the Colorado River delta during a rare release of water, a kayak sprint down a flash-flooding Little Colorado River, and a packraft trip on the Elwha River in Washington through the largest dam removal project in history.

Award-winning journalist and film producer Zak Podmore covers conservation issues, outdoor sports, and Utah politics. He is a Report for America fellow at the Salt Lake Tribune and editor-at-large for Canoe & Kayak magazine. His work appears in Outside, High Country News, Four Corners Free Press, and the Huffington Post. He lives in Bluff, Utah.
or support indie stores by buying on
Copyright © 2020 American Booksellers Association