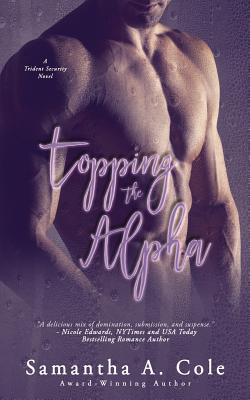 "A delicious mix of domination, submission, and suspense." New York Times and USA Today bestselling author Nicole Edwards Getting involved with your brothers' friend and employee is never a good idea, but after being dominated by Jake Donovan for one night, Nick Sawyer wants more. A Navy SEAL, Nick's been the alpha in every relationship he's ever had, but now finds himself craving to submit to Jake again. The problem is Jake's determined that will never happen. Thrown together to help a girl in danger, Nick starts breaking through Jake's defenses, but when things go awry, Jake must confront the ghosts from his past before he can ever think about a future. Nick just hopes that future includes him. ***The Trident Security series contains elements of the BDSM lifestyle, sensual romance, nail-biting suspense, and happily-ever-afters.

A proud member of Romance Writers of America (RWA), Samantha A. Cole is a retired policewoman and former paramedic who is thrilled to add award-winning author to her list of exciting careers. She has lived her entire life in the suburbs of New York City and is looking forward to becoming a snow-bird between New York and Florida someday. Her two fur-babies, Jinx and Bella, keep her company and remind their mom to take a break from writing every once in a while to go for a walk, which is the best way to deal with a stubborn case of writer's block. An avid reader since childhood, Samantha was often found with a book in hand and sometimes one in each. After being gifted with a stack of romance novels from her grandmother, her love affair with the genre began in her teens. Many years later, she discovered her love for writing stories was just as strong. Taking her life experiences and training, she strives to find the perfect mix of suspense and romance for her readers to enjoy. Her standalone novel, The Friar, won the silver medal in the 2017 Readers' Favorite Awards in the Contemporary Romance genre out of more than 1000 entries. While the original planned stories for the Trident Security series have been completed, they have brought many opportunities for Samantha to spread her wings and bring her readers more characters and stories to love. Look for her new Trident Security Omega Team series, Doms of The Covenant Novella series, Blackhawk Security series, and more from the Malone Brothers series, in addition to several standalone projects.
Loading...
or support indie stores by buying on