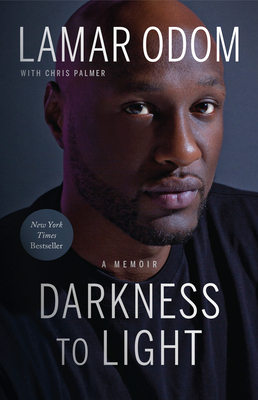 Fame. Sex. Pain. Drugs. Death. Booze. Money. Addiction. Redemption. Dizzying heights. Rock-bottom depths. Desperation and elation--sometimes in the same hour. Not to mention power . . . and the struggle for it.

The world knows Lamar Odom as a two-time NBA world champion who rocketed to uncharted heights of fame thanks to being a member of both the storied Los Angeles Lakers and the ubiquitous Kardashian empire.

But who is Lamar, really?

Fans have long praised his accessibility and genuine everyman quality--he is a blinding talent who has suffered a series of heartaches, setback, and loss. But until now, his most candid moments have remained behind closed doors . . . sometimes face-down on the floor.

In Darkness to Light, Lamar gives readers an intimate look into his life like never before. His exclusive and revealing memoir recounts the highs and lows of fame and his struggle with his demons along the way to self-discovery and redemption. From the pain of his unraveled marriage to Khlo Kardashian to the harmful vices he used to cope--and the near-death experience that made him rethink everything about his life--this is Lamar as you have never before seen him.

Lamar brings basketball fans directly into the action of a game during the Lakers championship years. He shares his personal account of the lifelong passion that started as one shining light in a childhood marked by loss and led to his international fame as one of the most extraordinary athletes of all time. In this profoundly honest book, Lamar invites you to walk with him through the good times and bad, while looking ahead to a brighter future.

Lamar Odom is a two-time NBA champion and 13-year veteran. He was a regular cast member on E!'s worldwide sensation Keeping Up with the Kardashians, the highest rated reality show in history. He also starred in the wildly popular spinoff Khloe & Lamar, which documented one of the most covered marriages in recent Hollywood memory. Chris Palmer is a longtime sportswriter who has covered the National Basketball Association for 20 years for ESPN The Magazine and all of ESPN's digital platforms, as well as various other outlets. He is currently a writer for ESPN's The Undefeated and a contributing analyst for Spectrum SportsNet, the Lakers flagship network. He's the author of six books including Wide Open, the New York Times bestselling autobiography of Supercross Champion Jeremy McGrath.
or support indie stores by buying on
Copyright © 2020 American Booksellers Association