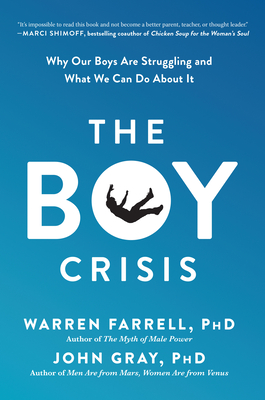 What is the boy crisis?

It's a crisis of education. Worldwide, boys are 50 percent less likely than girls to meet basic proficiency in reading, math, and science.

It's a crisis of mental health. ADHD is on the rise. And as boys become young men, their suicide rates go from equal to girls to six times that of young women.

It's a crisis of fathering. Boys are growing up with less-involved fathers and are more likely to drop out of school, drink, do drugs, become delinquent, and end up in prison.

It's a crisis of purpose. Boys' old sense of purpose--being a warrior, a leader, or a sole breadwinner--are fading. Many bright boys are experiencing a "purpose void," feeling alienated, withdrawn, and addicted to immediate gratification.

So, what is The Boy Crisis? A comprehensive blueprint for what parents, teachers, and policymakers can do to help our sons become happier, healthier men, and fathers and leaders worthy of our respect.

Dr. Warren Farrell is the author of books published in 17 languages. They include two award-winning international best-sellers: Why Men Are The Way They Are plus The Myth of Male Power. Warren has been chosen by the Financial Times as one of the world's top 100 thought leaders. Dr. Farrell is currently the Chair of the Commission to Create a White House Council on Boys and Men. He is the only man in the U.S. to have been elected three times to the Board of the National Organization for Women (NOW) in New York City. He started more than 300 men and women's groups, including ones joined by men from John Lennon to John Gray. Dr. Farrell has appeared repeatedly on Oprah, TODAY, and Good Morning America, and been the subject of features on 20/20, in Forbes, The Wall Street Journal, People, Parade, and The New York Times. Dr. John Gray is the author of Men are from Mars, Women are from Venus. USA Today listed Mars/Venus as number six among the most influential books of the last quarter century. In hardcover, it was the number one bestselling nonfiction book of the nineties. John Gray's books are translated into approximately 45 languages in more than 100 countries. Dr. Gray's more recent books include Mars and Venus in the Bedroom, Why Mars and Venus Collide, and Work With Me (with Barbara Annis). John has appeared repeatedly on Oprah, as well as on The Dr. Oz Show, TODAY, CBS This Morning, Good Morning America, etc. He has been profiled in Time, Forbes, USA Today, TV Guide, and People. He was also the subject of a three-hour special hosted by Barbara Walters.
or support indie stores by buying on
Copyright © 2020 American Booksellers Association