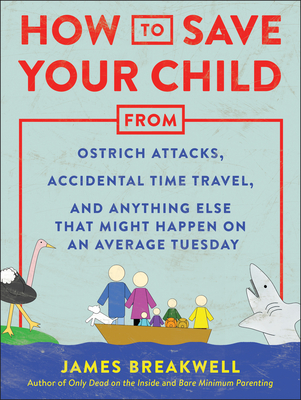 How to Save Your Child from Ostrich Attacks, Accidental Time Travel, and Anything Else That Might Happen on an Average Tuesday (Paperback)

The parenting humorist behind the viral Twitter account @XplodingUnicorn and author of Only Dead on the Inside: A Parent's Guide to Surviving the Zombie Apocalypse presents the long-awaited guide to surviving everything else

In the era of instant parent shaming and viral hot takes, some questions are too dangerous to ask out loud: What's the proper first aid for my toddler's vampire bite? What should I do if I take a wrong turn on the way to soccer practice and end up in the Cretaceous Period? How can I fend off Godzilla without disrupting my child's nap?

Fortunately, there's now a parenting resource that answers those burning questions and many more.

This is an essential guide for anyone who has children, might have children someday, or is vaguely aware children exist. Put this book down at your own--and your children's--risk.

James Breakwell is a professional comedy writer and amateur father of four girls ages 7 and under. His Twitter account @XplodingUnicorn has more than 640,000 followers who check in with him daily as he fails as a parent and a human being. Breakwell's comedy went viral in April 2016 when Buzzfeed featured his kid-centric jokes in an article that quickly drew more than 2 million views. His @XplodingUnicorn account grew by more than 400,000 followers in the following months. His jokes have been featured by USA Today, US Magazine, DailyMail.com, Metro.co.uk, Huffington Post, 9GAG, theCHIVE.com, CollegeHumor.com, various ABC and Fox TV news affiliates, and countless other TV, radio, and Internet outlets. His articles have appeared in Reader's Digest, The Federalist, and AskMen. He has been a guest multiple times on HLN's The Daily Share, and they haven't banned him yet. He can open most jars on the first try and is only a little afraid of the dark. He still can't load the dishwasher right.
or
Buy Here
Copyright © 2020 American Booksellers Association