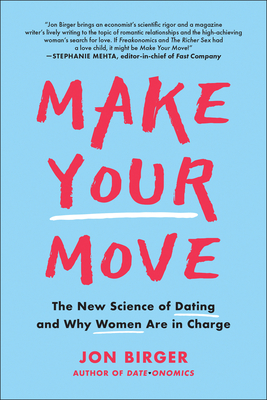 The New Science of Dating and Why Women Are in Charge

Modern romance is broken. It's time to flip the script.

Apps have transformed dating from a mysterious adventure into a daily chore. Young, single, college-educated women are sick and tired of competing for a shrinking supply of guys. And marriage-material men, long expected to take the lead when it comes to asking women out, are suddenly balking at making the first move, fearing they'll come across as creepy or inappropriate.

Society is changing, which means it's time for dating to evolve. Millennial and Gen Z women are more than capable of seeking out what--and who--they want. They're standouts in the classroom and champions on the playing fields. They're leaders in the workplace and trailblazers in city halls, state houses, and Congress. So why would we tell a generation of badass women that they're not allowed to be bold when it comes to finding love? Why should they have to sit back and wait (and wait and wait) for men to find them?

In Make Your Move: The New Science of Dating and Why Women Are in Charge, Jon Birger, author of Date-onomics, offers women bold new strategies for finding the one. Backed by research showing that women can win at romance by making the first move with the men of their choice, Birger explains why:

Make Your Move is an honest, solution-based guide to finding love that lasts. If you're tired of playing by old rules, look no further: Make your move and win.

Jon Birger is an award-winning magazine writer, a contributor to Fortune, and the author of Date-onomics: How Dating Became a Lopsided Numbers Game. A former senior writer at both Fortune and Money, Jon's work has also appeared in Barron's, Bloomberg BusinessWeek, New York Magazine, Time, and Washington Post. He was included on AlwaysOn Network's list of "Power Players in Technology Business Media." A familiar face and voice on television and radio, Jon has been a guest on ABC's Good Morning America, BBC World Service, CNBC, CNN, MSNBC, National Public Radio, and Fox News-discussing a wide range of topics from the dating market to the stock market to oil market.
or support indie stores by buying on
Copyright © 2020 American Booksellers Association