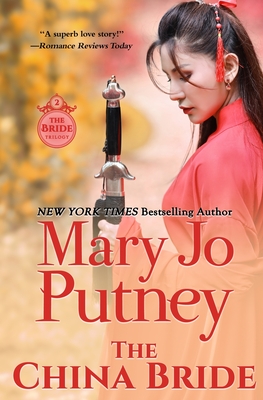 A lord yearning for adventure and a lonely woman longing for a home...

The daughter of a Scottish father and a Chinese mother, Troth Montgomery grew up in Macao fluent in the language and culture of both parents, but her father's sudden death condemned her to a shadowy life as an interpreter in Canton. Then Kyle Renbourne, viscount and adventurer, discovers her true identity and persuades her to be his guide for a dangerous journey into the heart of the Celestial Kingdom.

For Kyle, Troth is an enchanting combination of strength and wisdom unlike any woman he's ever met. As they travel together, attraction flares into a searing passion that ends when Kyle is captured and condemned to death. After a desperate prison cell marriage, Troth promises to carry news of his fate back to his family.

Believing him dead, Troth makes the long journey to England, arriving in bitter winter at the estate of Kyle's brother. Though accepted as bride and widow, she is haunted by the memory of her dashing husband and the brief, forbidden love they shared as she struggles to adjust to her new life.

Then the past reaches out to Troth, bringing passion, despair, and a danger that has followed her halfway around the world. In the wild hills of Scotland she must draw on her unique heritage to save all she holds dear-and find the love and home she has always dreamed of.

About the author: New York Times, Wall Street Journal, and USAToday bestselling author Mary Jo Putney's novels are known for psychological depth and intensity. Winner of numerous writing awards, she has five times had books listed among the Library Journal's top five romances of the year, and three times had books among the top ten romances of Booklist, the magazine of the American Library Association.