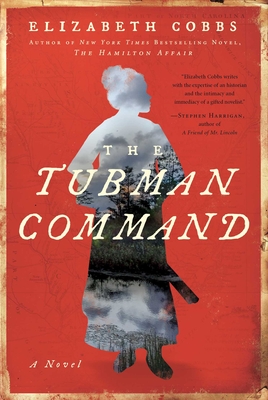 If you loved the movie HARRIET https://www.focusfeatures.com/harriet/ you will love THE TUBMAN COMMAND! From the bestselling author of The Hamilton Affair, a novel based on a thrilling chapter of Civil War history and African American history, how Harriet Tubman lead a Union raid to free 750 slaves.

Elizabeth Cobbs is a historian, New York Times bestselling novelist, and documentary filmmaker. She is the author of four books on American history and a winner of the Allan Nevins Prize. Her novel Broken Promises: A Novel of the Civil War won the San Diego Book Award.

1. Harriet Tubman chose to leave her first husband. Whom does she fault for the ruin of that marriage? Do you agree?

2. What effect did their break-up have on Harriet?

3. How does being a woman complicate Harriet’s experience as a leader? What are some of her techniques for coping with male superiors—and subordinates?

4. For Harriet, what is the price and what are the rewards of leadership?

5. How did mothers and fathers experience slavery differently? What sorrows did they face in common?

6. Harriet’s memories of her sisters surface repeatedly. What role do they play in her life?

7. Harriet feels guilt in relation to her daughter. Do you think her doubts and regrets are justified? Might a male soldier feel differently?

8. Harriet falls in love with a married man. What are the sources of her ambivalence? What is the correct moral course?

9. What does “freedom to love” mean to a person in Samuel’s situation? Why was marriage so complicated for those who were enslaved and then freed? Did Samuel have just one right choice?

10. Thomas Wentworth Higginson and James Montgomery disagree about how to treat Southern plantation owners. Can you see both men’s points of view? Which approach do you think has a stronger basis in morality?

12. No one who was enslaved had protection, but the experience could affect men and women differently. None of Harriet’s sisters made it to safety. What insights does this give us into how gender influenced the experience of slavery?

13. Discuss Septima, Walter, and Kizzy. What does the reader learn about Harriet from her relationships with them?

14. Harriet Tubman exhibited uncommon valor. Could anyone do what she did? Why or why not?

15. Is Harriet Tubman a Christ-like figure? Does she want to be?

16. The Ten Commandments say, “Thou shall not bear false witness.” Harriet Tubman deceives enemies, friends, and family. Why, in each case? How does this affect her?

17. Discuss Tubman’s physical disability. What does it tell the reader about her?