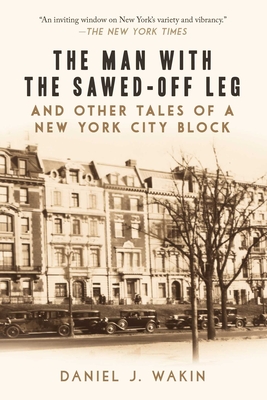 A Fascinating Biography of One City Block in Upper Manhattan, Bringing Buildings to Life through Stories Drawn from the Flesh-and-Blood Beings who Pass Through Them

If only the walls could talk, what would they say?

Standing proudly, gazing across the Hudson River at the cliffs of New Jersey, their brows are marked by ornamental pediments. Greek columns stand as sentries by their entrances and stone medallions bedeck their chests. They are seven graceful relics of Beaux Arts New York, townhouses built more than one hundred years ago for a new class of industrialists, actors and scientists—many from abroad—who made their fortunes in the United States and shaped the lives of Americans.

This book brings to life the ghosts who inhabit that row of townhouses on Manhattan's stately Riverside Drive for the first fifty years of the twentieth century. From gangsters to industrialists, from future mayors to murderers, from movie stars to mafia dons, one block in a burgeoning city saw it all. Meet some of the colorful collection of people who lived in each of New York's "Seven Sisters," including: Daniel Wakin pulls together their individual stories and weaves them into a tapestry indicative of and unique to New York City, breathing new life into these historic buildings and the histories they've witnessed and giving us an unforgettable, intimate glimpse into the past.

"An urban anthropological biography of seven Upper West Side buildings [that] provides an inviting window on New York's variety and vibrancy." —The New York Times

"The history of New York is so vast that it lends itself to volumes of extreme length. This slim book is a welcome breezy complement to those encyclopedic accounts." —The New York Times Book Review

"Wakin's aim is to find the hidden lives in these stalwart buildings of New York's Upper West Side, but it is he who breathes life into them in this wonderful reverie of a book. All city streets should have such history; and all micro-histories — peopled with Runyan-esque gangsters, early biotech adventurers, and unscrupulous society folk—should have a chronicler the likes of Wakin to lend them the breadth, insight, and vitality that you will find on each and every page." —Jonathan Rabb, author of Among the Living and many others.

"A riveting true crime story that also unlocks the doors of some of New York's most evocative characters of the last century. A great read for anyone interested in the secrets of the city." —Michael Gross, editor of Avenue Magazine and author of 740 Park: The Story of the World's Richest Apartment Building

"A wonderful writer and terrific reporter, Daniel Wakin brings alive the many tales of a single city block, taking us on journey back to a vanished New York." —Michael Shapiro, author of The Last Good Season and Bottom of the Ninth

"For fans of New York–iana, including historic preservation buffs as well as collectors of true crime, eccentrics, and odd moments." —Kirkus Review

“Wakin is an excellent storyteller. . . . While you understand that this book is about a few buildings, it also feels inescapably like a larger story about New York.” —Alexander Aciman, The Tablet

"The Man with the Sawed-Off Leg provides an intimate look at the stories behind, and inside, seven buildings located on one Upper West Side block." —Metrofocus

Daniel J. Wakin has been an editor and reporter at The New York Times since 2000. As a reporter for the Times, his beats included religion, classical music and dance, and general assignment in the Metro department. He has covered stories in more than a dozen countries in Asia, the Middle East, Europe and Latin America, including the election of two popes. He also took part in the group that produced the Emmy-nominated multimedia project Inside the Quartet. A graduate of Harvard University with a degree in the Classics, Mr. Wakin continues to be an avid amateur clarinetist. The Man with the Sawed-Off Leg and Other Tales of a New York City Block is his first book.
Loading...
or
Not Currently Available for Direct Purchase