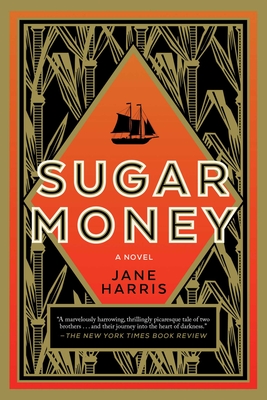 For Readers of The Yellow Crocus and The Underground Railroad, a Poignant Novel Inspired by a True Story about the Heroism of Two Enslaved Brothers Sent to Steal Slaves from the British in Grenada and the Tragic Results of this Doomed Mission

Set in 1765 on the Caribbean islands of Grenada and Martinique, Sugar Money opens as two enslaved brothers—Emile and Lucien—are sent on an impossible mission forced upon them by their masters, a band of mendicant French monks.
The monks run hospitals in the islands and fund their ventures through farming cane sugar and distilling rum. Seven years earlier—after a series of scandals—they were ousted from Grenada by the French authorities, and had to leave their slaves behind. Despite the fact that Grenada is now under British rule, and effectively enemy territory, the monks devise an absurdly ambitious plan: they send Emile and Lucien to the island to convince the monks’ former slaves to flee British brutality and escape with them.

Award-winning author Jane Harris peoples her daring novel, based on a historical rebellion, with unforgettable characters. Recounted by Lucien, the younger brother, this story of courage, disaster, and love, is a testament to the tenacity of the human spirit under the crush of unspeakable cruelty.

Praise For Sugar Money: A Novel…

"Harris credits Robert Louis Stevenson as inspiration for this book. It's evident why. Like Stevenson, she describes an exotic setting and tells a ripping good story….A quite good book with wide appeal." —Library Journal (Starred)

"Draws on an obscure historical event to craft an affecting account of a young boy’s coming-of-age.…Harris makes the most of her choice to portray the cruelties of slavery through the eyes of a young lead, a decision that pays off handsomely by the moving conclusion."—Publishers Weekly

"A vivid, perfectly paced tale of slavery and freedom, innocence and experience, love and despair, Sugar Money is told in an unforgettably beautiful language. What a stunning writer Jane Harris is, mastering an extremely harrowing and complex subject and making it into art."—Amanda Craig, author of In a Dark Wood

"With a narrator so enthralling he brings to mind Melville's Ishmael, Sugar Money takes readers on a journey into the heart of a Caribbean slave. Author Jane Harris has written an exhilarating tale of slavery, love, and the human drive for a better life even in the face of impossible odds."—Stephanie Storey, author of Oil and Marble: A Novel of Leonardo and Michelangelo

"With a richness of historical detail, wry wit, and subtle characterization reminiscent of Hilary Mantel, Harris bridges the distance of centuries, to the slave plantations of eighteenth century Grenada. Through the eyes of young Lucien, we witness the cruelties of slavery, the heroism of his brother Emile—and are powerfully reminded that the past is, in many ways, still with us."—Huffington Post

"...It is in Grenada that Harris makes the brutal reality of slavery utterly plain. The risk of her earlier restraint has paid off and the brief, harrowing scenes towards the novel's climax have an extra power because of it..."—Alex Peake-Tomkinson, The Spectator

"Harris builds a lush sense of place, and the pace and tension of a rip-roaring adventure here, with derring-do and double-crossing and a looming sense of threat and dread from the start… But what is most striking is the irrepressible voice of Lucien — whose highly original multilingual turns of phrase bring a spark and tingle to the telling of his tale — and the fractious but profound relationship he has with the desperate, damaged Emile."—The Times (London)

"It is Lucien's voice, bright and upbeat, in an enchanting mix of English, French and Creole, which really makes the novel. His language is deliciously descriptive: 'Naught but a slice of corossol had passed my lips that morning and my belly was biting me' is just one example of the lyrical quality which infuses the novel."—Scotland on Sunday

"After two well-received mysteries set in Victorian Scotland, Harris's latest novel takes us to the colonial-era Caribbean for a wrenching tale of derring-do, told by a slave caught in the crossfire between warring imperial powers... Based on a true story, the drama — which turns on an audacious Christmas Eve bid for escape — supplies rip-roaring adventure and unspeakable tragedy, while airing dirty laundry from Britain’s imperial past."—Anthony Cummins, The Daily Mail

"Based on a true story, and told by Lucien in rich, supple prose that echoes the rhythms of Caribbean speech, Sugar Money gives a memorable voice to people whose lives have largely been ignored by history and fiction."—Nick Rennison, The Sunday Times

"A gripping tale of colonial cruelty set in the Western Antilles in the late 18th century. Enthrallingly narrated by Lucien, a teenage slave… This is a novel that celebrates the incredible capacity of humans to pursue lives filled with love and courage in the face of overwhelming cruelty. Harris’ novel may be set some 250 years ago, but it has a key relevance to the modern slavery that still blights our world."—The National (Scotland)

"Sugar Money is lit-award fodder. ...It's a gripping, uncomfortable premise, and all the more so for discovering it’s loosely based on a true story. Harris' strong writing manages to weave the horrifying and sobering details of Lucien's life into a tale that is also, by turns, an adventure, a romance and a study of brotherly love."—Glamour Magazine

"Jane Harris pitches you headfirst into this outstanding, heartbreaking story of siblings, slavery and the savagery of the colonial past... Unwilling participants in a deadly escapade, their fate and the fates of their fellow slaves are beyond their control. As this superb novel reveals, they are at the mercy of the merciless."-- Charlotte Heathcote, Sunday Express

"If you want a tale of adventure and daring do, filled with wonderful characters, that makes you think and explores a period of history you may not know of (oh and I should say this book is based on a true story) that will leave you heartbroken yet with a sense of hope then this is a book you should be rushing out to get right now..."—Simon Savidge, Savidge Reviews

"Based on a true story, this novel gives an unflinching account of the appalling reality of slavery and colonialism. Beautifully written with a taut story-line and shrewd characterization, Sugar Money is singularly impressive."—Book Riot

"The Observations is a deliriously captivating tale of sex, ghosts, lies, and mysteries. But that’s not the good part; the good part is our narrator Betsy, a fifteen-year-old Irish made living in Scotland with the freshest, sharpest, naughtiest, and most charming voice you’re apt to encounter in literature in a good long time. I adored her and couldn’t put her story down."—Elizabeth Gilbert, author of Eat, Pray, Love

"I wept at the end of this brilliant first novel because I was so moved at the way Jane Harris sustains the vivacity, eloquence and pathos of her tale."—Sunday Herald (Glasgow)

"Harris is already being spoken about in the same breath as Sarah Waters and Michel Faber. In Betsy, she has created a bawdy, picaresque character who holds our attention for more than 400 pages. The Observations combines the best qualities of literary fiction with page-turning accessibility."—The Observer (London)

"Harris's voice is an original one, and her rollicking yet delicate narrative pitch sets the book apart... This is a true one-off."—Joanna Briscoe, Guardian

Jane Harris (born 1961) is a Scotland born British writer of fiction and screenplays. Her latest novel, Gillespie and I, was published to critical acclaim in the UK in May 2011 by Faber and Faber. Her first novel The Observations was shortlisted for the Orange Prize for Fiction 2007 and has been published in over 20 territories worldwide. In France, The Observations was shortlisted for the Prix du Premier Roman Etranger (2009), and in the USA it won the Book of the Month Club’s First Fiction Prize (2007). The Observations chosen as one of the 100 Books of the Decade. Jane currently lives in East London.
or support indie stores by buying on