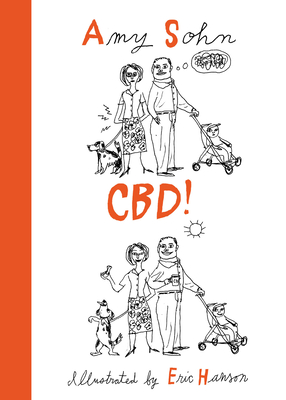 A parable about a hapless dad whose life changes when he discovers the wonders of CBD, written in the style of the classic children's book CDB (1968). Both a parodic children's book and a puzzle book, it will delight CBD users, irreverent parents, and anyone curious about or appalled by wellness. CBD: you can't escape the cannabis derivative. Cannabidiol is an omnipresent cureall that has gone from being voguish to a mainstream panacea, as the New York Times observed (Why Is CBD Everywhere? Oct. 27, 2018). And it's a particular favorite of the stroller-pushing crowd endemic to chic-er areas of New York, the Bay Area and other similar urban environs. Comedic and light-hearted, Amy Sohn's CBD pokes fun at the national obsession with CBD as well as the legalization of marijuana in many states in America. Though not appropriate for kids (except for really smart and transgressive ones ones), this parody will appeal particularly to parents who have read William Steig's beloved classic CDB to their kids, or to those Gen X-ers and Boomers who remember it from their own childhood or parenthood. Praise for Amy Sohn: A little-known event that took place around the time that Richard M. Nixon was resigning as President was the birth of Amy Sohn. . . . Ms. Sohn has emerged as a representative of her generation... --The New York Times

AMY SOHN is the bestselling author of the novels Prospect Park West, Motherland, My Old Man, Run Catch Kiss, and The Actress, all published by Simon & Schuster. Her books have been published in eleven languages. Her wildly popular columns have run in New York Press, the New York Post, Grazia (UK), and New York. She has also written for The Awl, Harper's Bazaar, Men's Journal, Playboy, Elle, The New York Times, and many other publications online and in print. She has written pilots for ABC, Fox, Lifetime, and HBO, working with producers Eva Longoria, Darren Star, and Sarah Jessica Parker. She co-created, wrote, and starred in the short-form series Avenue Amy for Oxygen, one of its first original shows. Raised in Brooklyn, she still lives there today.
Loading...
or support indie stores by buying on