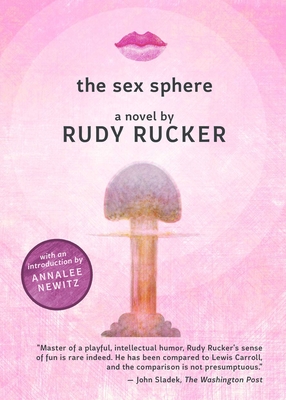 When Alwin, a disaffected young physicist, takes a vacation in Florence with his wife Sybil and finds himself kidnapped by terrorists, he is soon wrapped up in a potentially world-changing—and utterly bizarre—plot.

It’s not just that the terrorists are building an atomic bomb, which they want Alwin to help with, and it’s not just that he is desperately attracted to one of his captors. It’s that they have trapped a weird, four-dimensional creature of hypermatter who happens to resemble, well, a spherical naked woman. And who absolutely oozes mind-clouding, desire-inducing pheromones . . .

Before they know it, Alwin and Sybil are both discovering the pleasures and curiosities of the sex sphere, while on the run from the various forces chasing them. But what is the sphere itself, really? Why is it stuck in our dimension? And what does it want in the end?

Praise For The Sex Sphere…

Praise for The Sex Sphere

“Alien invaders tend to squirt acid, go invisible, or drive humongous ships. Not the ones in Rudy Rucker's 1980s classic The Sex Sphere, where an alien named Babs and her crew take the form of disembodied sex organs that attach to human hosts . . . Only trip-tastic writer Rucker could imagine such a scenario . . . If you like your science fiction to contain hard science mixed with bizarro humor, don't miss The Sex Sphere.” —Annalee Newitz, io9

“Phenomenally weird . . . The Sex Sphere is a tome that deserves to be on the ‘experimental/avant garde’ shelf along with books by Irvine Welsh, Iain Banks, and William Burroughs. It’s a crossover book for anarchist-stoner-hipsters and it’s a far-out read, playing havoc with the concepts of math, sex and politics.” —Ivan Lerner, Revolution Science Fiction

“You cannot know where modern science fiction has gotten to unless you are familiar with Rucker’s work.” —Fantasy & Science Fiction

“Rucker’s writing is great like the Ramones are great: a genre stripped to its essence, attitude up the wazoo, and cartoon sentiments that reek of identifiable lives and issues. Wild math you can get elsewhere, but no one does the cyber version of beatnik glory quite like Rucker.” —New York Review of Science Fiction

“For some two decades now, since the publication of his first novel, White Light, Rucker has combined an easygoing, trippy style influenced by the Beats with a deep engagement with knotty (or ‘gnarly,’ to employ one of his favorite terms) intellectual conceits, based mainly in mathematics. In the typical Rucker novel, likably eccentric characters—who run the gamut from brilliant to near-certifiable—encounter aspects of the universe that confirm that life is weirder than we can imagine.” —The Washington Post

“Rudy Rucker is the most consistently brilliant imagination working in SF today.”— Charles Stross, author of The Laundry Files

“Reading a Rudy Rucker book is like finding Poe, Kerouac, Lewis Carroll, and Philip K. Dick parked on your driveway in a topless ’57 Caddy . . . and telling you they’re taking you for a RIDE. The funniest science fiction author around.” —Sci-Fi Universe

“Rucker [gives you] more ideas per chapter than most authors use in an entire novel.” —San Francisco Chronicle