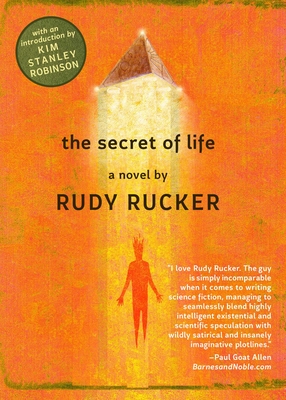 The Secret of Life

A 60s college student learns he’s a saucer alien in this hilariously intelligent tale of adolescent angst and romance from Rudy Rucker.

Conrad Bunger is one of those  wild guys you think won’t  make it to legal drinking age. But, thanks to the strange powers he manifests in times of crisis—he can change his face, shrink to the size of a thumb, fly around the Eiffel tower, and hand out joints to everyone at the student assembly—not even the most ghastly mishaps interrupt his quest for  visions, beer, and love.

Gradually, Conrad awakens to his true identity as an energy being from outer space. As if he hadn’t suspected it all along. Now, as he faces his true nature, he learns his ordained purpose: to proceed incognito and to reach the ultimate prize—the Secret of Life.

Problem is, he’s having too much fun to keep it together. Even with the government out to kill him . . .

Praise For The Secret of Life…

Praise for The Secret of Life

“Rucker is an artist well worth discovering, reading, and keeping up with. [His novels] sparkle with deadpan wit and a natural storyteller’s flair . . . blending mathematical speculation, such concepts as Hilbert space, rock’n’roll, drugs, and sex [with] imaginative ideas worthy of H.G. Wells.”—Washington Post Book World

“Not your usual coming of age story, that’s for sure. If I were teaching high school kids, I’d include The Secret of Life on the syllabus. Without being juvenile, the book qualifies as a great piece of witty juvenilia.”—Ivan Lerner, Revolution Science Fiction

“One of the writers we will follow into the new future.”—Raleigh Spectator

“Rucker’s writing is great like the Ramones are great: a genre stripped to its essence, attitude up the wazoo, and cartoon sentiments that reek of identifiable lives and issues. Wild math you can get elsewhere, but no one does the cyber version of beatnik glory quite like Rucker.” —New York Review of Science Fiction

“For some two decades now, since the publication of his first novel, White Light, Rucker has combined an easygoing, trippy style influenced by the Beats with a deep engagement with knotty (or ‘gnarly,’ to employ one of his favorite terms) intellectual conceits, based mainly in mathematics. In the typical Rucker novel, likably eccentric characters—who run the gamut from brilliant to near-certifiable—encounter aspects of the universe that confirm that life is weirder than we can imagine.” —The Washington Post

“Rudy Rucker is the most consistently brilliant imagination working in SF today.”— Charles Stross, author of The Laundry Files

“Reading a Rudy Rucker book is like finding Poe, Kerouac, Lewis Carroll, and Philip K. Dick parked on your driveway in a topless ’57 Caddy . . . and telling you they’re taking you for a RIDE. The funniest science fiction author around.” —Sci-Fi Universe

“Rucker [gives you] more ideas per chapter than most authors use in an entire novel.” —San Francisco Chronicle