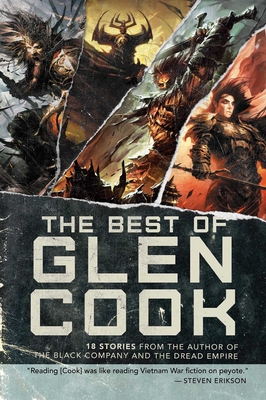 The Best of Glen Cook

The best short fiction of legendary author Glen Cook (The Black Company, the Dread Empire) is collected into a new hardcover volume.

For over forty years, Glen Cook has been among the most well-known, influential, and widely respected authors in science fiction and fantasy. Through classic series such as The Black Company, Garrett P.I., the Dread Empire, Starfishers, Darkwar, and more, his gritty, down-to-earth style left an indelible impression on his readers around the world, forever shifting the genre landscape and carving out his place as a pioneering icon.

The Best of Glen Cook collects eighteen of his greatest stories—as chosen and introduced by the author himself—including a new, never-before-published Black Company novelette. With works set in all of his most famous series, these tales of science fiction and fantasy offer both the perfect way for longtime fans to trace Cook’s history and for new readers to become familiar with one of the finest genre authors of the twentieth century.

Praise For The Best of Glen Cook: 18 Stories from the Author of The Black Company and The Dread Empire…