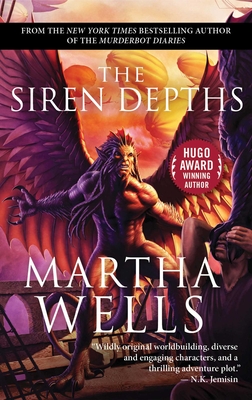 Volume Three of the Books of the Raksura

The Third Novel in the Hugo Award-Nominated Books of the Raksura series, from New York Times Bestselling Author Martha Wells (The Murderbot Diaries).

All his life, Moon roamed the Three Worlds, a solitary wanderer forced to hide his true nature — until he was reunited with his own kind, the Raksura, and found a new life as consort to Jade, sister queen of the Indigo Cloud court.

But now a rival court has laid claim to him, and Jade may or may not be willing to fight for him. Beset by doubts, Moon must travel in the company of strangers to a distant realm where he will finally face the forgotten secrets of his past, even as an old enemy returns with a vengeance. The Fell, a vicious race of shape-shifting predators, menaces groundlings and Raksura alike.

Determined to crossbreed with the Raksura for arcane purposes, they are driven by an ancient voice that cries out from . . . the siren depths.

Martha Wells is the author of more than a dozen science fiction and fantasy novels, including the Ile-Rien series (The Death of the Necromancer), the Murderbot Diaries series (All Systems Red), and the Books of the Raksura (The Cloud Roads). Her work has won the Nebula, Hugo, and Locus Awards, been nominated for the Nebula and Compton Crook awards, and been published in eight languages. Wells lives in College Station, Texas.
Loading...
or
Not Currently Available for Direct Purchase