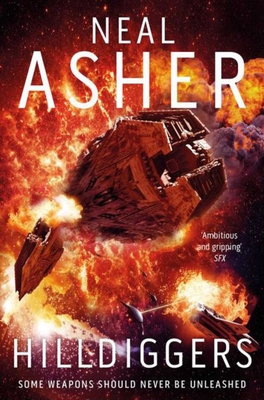 They have extraordinary power and aren’t afraid to use it . . .

Two planets in the same solar system are locked in war, when some kind of cosmic super-string is discovered. It seems packed with alien technology, or even perhaps life. And for safety it is stored – in four segments – within a maximum-security space station. A female research scientist falls pregnant on the station soon after, and gives birth to quads. Then she commits suicide. But why?

By the war’s end, one planet is devastated. It fell victim to the other’s incredible hilldigger weaponry – so named as their blasts create mountains. Meanwhile, the quads have reached adulthood, and are gaining power in post-war society. One of them has his sights set on claiming the hilldiggers and their power for himself. But with what consequences for humanity?

Praise For Hilldiggers: A Novel of the Polity…