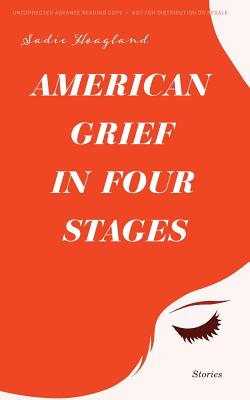 American Grief in Four Stages is a collection of stories that imagines trauma as a space in which language fails us and narrative escapes us. These stories play with form and explore the impossibility of elegy and the inability of our culture to communicate grief, or sympathy, outside of cliché.

One narrator, for example, tries to understand her brother’s suicide by excavating his use of idioms. Other stories construe grief and trauma in much subtler ways—the passing of an era or of a daughter’s childhood, the seduction of a neighbor, the inability to have children. From a dinner party with Aztecs to an elderly shut-in’s recollection of her role in the Salem witch trials, these are stories that defy expectations and enrich the imagination. As a whole, this collection asks the reader to envisage the ways in which we suffer as both unbearably painful and unbearably American.

“Sadie Hoagland’s stories are hard and bright as the twenty-first century, but with reflections that radiate into subtle chiaroscuro. She’s a startlingly fresh new writer; American Grief in Four Stages is a debut that will be remembered.”
Madison Smartt Bell, author of All Souls’ Rising

"This terrifying, brave collection takes the sting out of what happens when the worst has already occurred. Even in their loss, its broken characters find ways to try and explain the unexplainable to themselves."
Foreword Reviews

​“As riveting as short fiction gets.”
Jacob M. Appel, author of The Amazing Mr. Morality

Sadie Hoagland is an assistant professor of English at the University of Louisiana at Lafayette and the former editor of Quarterly West. Her work has appeared in Alice Blue Review, The Black Herald, Mikrokosmos Journal, South Dakota Review, Sakura Review, Grist, Oyez Review, Passages North, Five Points, The Fabulist, and elsewhere. Learn more at sadiehoagland.com.