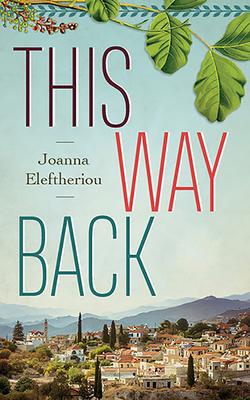 This Way Back (In Place)

Going back to her ancestral homeland, a Greek American girl discovers she is a lesbian in love with God, so her questions about home and belonging will not be easily answered.

This Way Back dramatizes a childhood split between Queens, New York, and Cyprus, an island nation with a long colonial history and a culture to which Joanna Eleftheriou could never quite adjust. The book avows a Greek-Cypriot-American lesbian’s existence by documenting its scenes: reenacting an 1829 mass suicide by jumping off a school stage onto gym mats at St. Nicholas, harvesting carobs on ancestral land, purchasing UNESCO-protected lace, marching in the island’s first gay pride parade, visiting Cyprus’s occupied north against a dying father’s wish, and pruning geraniums, cypress trees, and jasmine after her father grew too weak to lift the shears. While the author’s life binds the essays in This Way Back into what reads like a memoir, the book questions memoir’s conventional boundaries between the individual and her community, and between political and personal loss, the human and the environment, and the living and the dead.

Praise For This Way Back (In Place)…

“Joanna Eleftheriou’s collection This Way Back offers a series of essays that both stand alone and form a larger narrative about immigration, bicultural identity, sexual orientation, and the pull of a landscape. These lovely and moving essays are nostalgic, complex, and thoughtful, with sentences you will underline and return to and that will sear you with their beauty.”
Sonya Huber, author of Pain Woman Takes Your Keys and Other Essays from a Nervous System


“Intimate and a touch mournful, most powerfully so when the author writes about her sexuality. . . . These essays reveal an impassioned and hard-fought sense of self and place.”​​​​​​​
Kirkus Reviews (starred review)

“The essays entice every sense. . . . Heartfelt and heartrending.”
Foreword Reviews

Joanna Eleftheriou is an assistant professor of English at Christopher Newport University. A contributing editor at Assay: A Journal of Nonfiction Studies, she grew up in New York and Cyprus and now lives in Virginia. Her essays, short stories, and translations have been widely published.
Loading...
or support indie stores by buying on