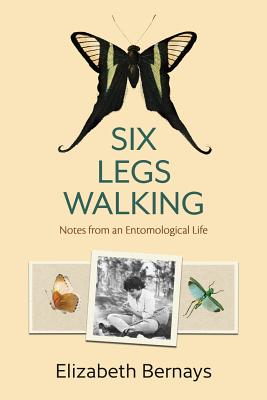 Notes from an Entomological Life

"This is a most interesting read, scientific discussion with the occasional diversion into personality and comedy . . . Most of all, her patient dedicated passion for detailed observation of the minute interactions between predator and insect prey impressed this reviewer." -Entomologist's Gazette

Like the painted lady butterflies that fascinated her as a child in Queensland, Australia, entomologist Elizabeth Bernays has lived a migratory adventure, following her scientific curiosity around the world before landing at the University of Arizona. In Six Legs Walking: Notes from an Entomological Life, Bernays takes us along on her evolution from backward child to accomplished biologist as she explores scholarship, culture, and love, all while immersed in the wonders of some of the smallest creatures on earth.

Young Liz becomes enamored with insects in her home garden while working beside her mother, who worries over her daughter being deemed intellectually impaired. An introduction to a working scientist and the encouragement of a beloved teacher inspire Elizabeth to go on to the University of Queensland to study biology.

While in graduate school in London, Elizabeth meets established entomologist Reg Chapman, who will become her partner in work and in life. As a British government scientist, she researches the habits of bugs in the hopes of finding biological solutions to controlling pests that damage crops in Nigeria, India, and Mali, working alongside local scientists and discovering the diversity of human cultural customs.

As a professor at the University of California Berkeley, she learns about American individualism and advocating on her own behalf. At last, Bernays settles in the Sonoran Desert, where she is visited by a hawk moth that launches her on yet another entomological expedition.

In this collection of autobiographical essays, Elizabeth Bernays educates readers on the progression and significance of biological research while sharing her sheer joy in the discoveries she makes. Six Legs Walking is the inspiring story of one woman's lifelong love affair with science.