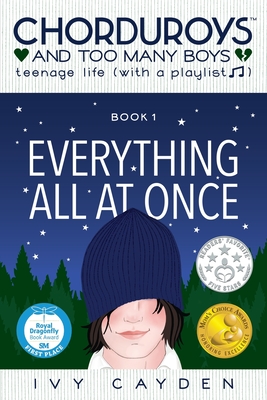 Everything All At Once (Paperback)

Teenage life (with a playlist).
Nearly sixteen, Kila Lorens showers herself in music, lives in plush corduroys, and always applies a double layer of lip gloss. She longs for the answers to this irritating trio of questions: When will she have her first kiss? Will Angus Lyr ever stop obsessi-texting Reese Seratine? And why did her former best friend, Brixton Kading, silently bow out of her life six months ago? The particulars of these unknowns, along with her mission to convince Maya Malta to share some sizeable news with a certain seventeen-year-old before he finds out from someone else, keep Kila's eyes open at night.
But one late hour delivers something worth hiding: a private Nektir message from Timothy Cardiff, the tall, inky-haired enigma who rarely speaks in school, yet somehow morphs into Salt for Swordsmen's frontman on the weekends. Amidst tandem listening and dizzying revelations, the two form an unlikely attachment. When their covert communication spills into the halls of Cypress High, they both wonder if this will be a short-lived or long-lasting entanglement.
Ethan Lorens, Kila's cautious but optimistic older brother, mostly focuses on his new drums and his indie band's potential. An after-school visit to Casper's Music Underground presents some unexpected industry intel. Following years of hiatus, Emerald Rock plans to host another EmOpen. Casper encourages the boys to prepare for the contest, but Ethan, Brixton, and Angus wrestle with the group's shortcomings. Could the young French chef they meet at The Hidden Meridian be the band's missing link?
Sometimes dreams come out to play. Mixing Kila and Ethan's friends together on a parentless weekend induces irreversible crushes, late-night courtship, and stinging heartache. With an elaborate, 67-song playlist to embed you in every magnetic moment and missed connection, you'll experience the rush of Everything All At Once, the first book in the CHORDUROYS AND TOO MANY BOYS(TM) series.

*Spotify is a registered trademark of Spotify AB. Neither The Hidden Meridian, LLC or its CHORDUROYS AND TOO MANY BOYS(TM) books are sponsored by or otherwise affiliated with Spotify.

Ivy Cayden lives on the rugged, pinetree-lined Central Coast of California. Years ago, on her first visit to Henry Cowell Redwoods State Park, she fell in love with the tall trees in Felton and returns whenever she gets the chance. Recently, she attempted to ditch coffee, but her irreversible crush on iced almond milk lattes rendered this notion impossible. A vegan for over a decade, Ivy is passionate about supporting small businesses and all things indie—especially music. In addition to writing the CHORDUROYS AND TOO MANY BOYS™ series, she founded and manages the indie music blog My Multi-Track Mind, where she interviews rising musicians, covers new releases, and posts moody playlists
or support indie stores by buying on
Copyright © 2020 American Booksellers Association