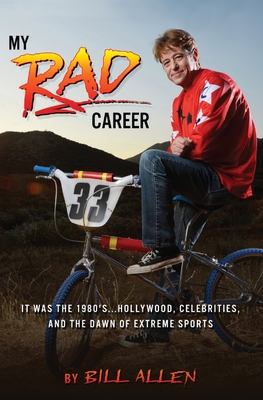 My RAD Career is a roller coaster ride through Hollywood in the 1980s as seen through the eyes of one of the cult figures of the era, Bill Allen (star of the movie RAD). Starting as a teen actor on his first ill-fated film alongside a young George Clooney, Bill shares his personal and professional relationships through film and television roles with some of the greatest actors and directors of a generation such as Robert Altman, Oliver Stone, Tom Cruise, Brad Pitt, Brandon Lee, Lou Diamond Phillips, Michael J. Fox, Melissa Etheridge and more. Told like you're sitting with him over drinks at a bar, Bill takes you inside the show biz bubble to reveal his most jaw-dropping experiences spanning three decades. RAD fans will be blown away at the true behind-the-scenes look at the filming of the most iconic BMX movie ever and how Bill ended up playing Cru Jones, while lovers of '80s culture and film will be fascinated to discover what it was like for Bill to date and get rejected by Lori Loughlin. Find out what really went on during this golden age of artistic development and output. Funny, irreverent, and gossipy, this sometimes philosophical and mystical journey is worthy of reading again and again.