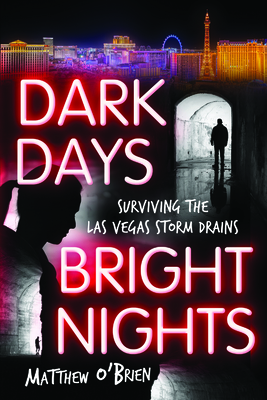 A vivid and enlightening oral account of homelessness in the Las Vegas storm drains and the hard work of re-entering mainstream society.

Are you aware that hundreds of people live underground in the flood channels of Las Vegas? Few people were until Matthew O'Brien grabbed a flashlight, tape recorder, and expandable baton for protection and explored the storm-drain system in depth. This research resulted in his landmark book Beneath the Neon. Now the drains have been covered by CNN, Fox News, NPR, Dr. Phil, the New York Times, the BBC, Al Jazeera, and many other media outlets. They have even found their way on to popular TV shows, including CSI, Criminal Minds, and into mainstream movies.

But the fact that several of these drug- and gambling-addicted tunnel dwellers have clawed their way out of the drains and turned around their lives has received far less attention.

Dark Days, Bright Nights shares their harrowing stories and provides a unique perspective on one of America's most fascinating cities. It also paints a larger picture of homelessness and recovery in America. These stories are the happy (though not Hollywood) ending to the infamous tunnel tale.

The narrative is complemented by bios and stark, black-and-white images of the survivors, putting a scarred, knowing face to the unblinkingly honest accounts.

Matthew O'Brien is a journalist and social worker who has been considered the foremost authority on homelessness in the Las Vegas storm drains for the past fifteen years. As a staff writer for the Las Vegas weekly newspaper CityLife, he co-wrote a series on the issue in 2002. It went viral and received national media attention. In 2004, he began work on a book about the subject, Beneath the Neon: Life and Death in the Tunnels of Las Vegas, a collection of gritty narratives exposing the dark side of Las Vegas.In 2009, O'Brien founded Shine a Light, a not-for-project organization that provides food, clothing, housing, and counseling services to those in the drains. Through his outreach work and as a guide for visiting journalists, he has continued to visit the tunnels and assist people seeking paths out of homelessness. These inspiring stories, which O'Brien would've never envisioned when he first went underground in 2002, led him to conduct interviews for a new book collecting voices of hope and recovery forged from deep despair. O'Brien is also the author of My Week at the Blue Angel a collection of narrative journalism. He has a master's in creative writing from the University of Nevada-Las Vegas and a Silver Pen (mid-career award) from the Nevada Writers Hall of Fame.
Loading...
or support indie stores by buying on