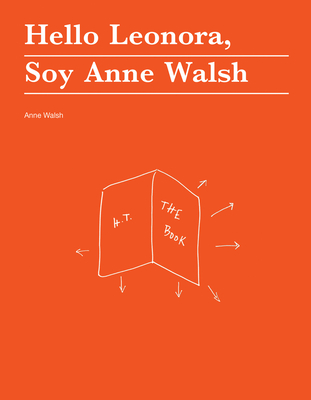 Over the past decade, artist Anne Walsh has created an ongoing, multipart response to surrealist painter Leonora Carrington's novel The Hearing Trumpet (written in the early 1960s, published in 1974). Walsh's interdisciplinary works, encompassing video, writing, and performance, chronicle her time with the nonagenarian author and, ultimately, her assumption of the identity of the aging artist. Hello Leonora, Soy Anne Walsh is a visual and written "adaptation" of Carrington's feminist novella, offering a narrative in fragments: a middle-aged artist named Anne Walsh falls in love with the 92-year-old author of a book about a 92-year-old woman who is placed in a sinister and increasingly surreal retirement home.

Walsh courts the author, travels to Mexico to meet her, fantasizes about adapting the book for film, and spends the next decade searching for The Hearing Trumpet's form and cast. Having discovered in Carrington's novel a thrilling, subversive example of old age, Walsh casts herself as an "Apprentice Crone." She stalks old people and takes selfies with them. She becomes a mother, passes through menopause. She sings her daughter's Disney movie songs at "elder theater" classes. She studies and rehearses the trauma, the affliction, the indignity that is old age, and she writes to Leonora Carrington.

Anne Walsh produces works in video, performance, audio, photography, and text. Her work has been shown at galleries and museums including Artists Space, CCS Bard Galleries, Whitney Museum of American Art, Royal College of Art, and The J. Paul Getty Museum. She is Associate Professor of Art Practice at University of California, Berkeley. Dodie Bellamy is an American novelist, nonfiction author, journalist, and editor. Julia Bryan-Wilson is Associate Professor of Modern and Contemporary Art at the University of California, Berkeley, and the author of Art Workers: Radical Practice in the Vietnam War Era. Rachel Churner is an art critic and editor. She teaches at the New School, New York, and is a cofounder of no place press. From 2011 to 2014, she owned and operated the New York gallery Churner and Churner.
Loading...
or support indie stores by buying on