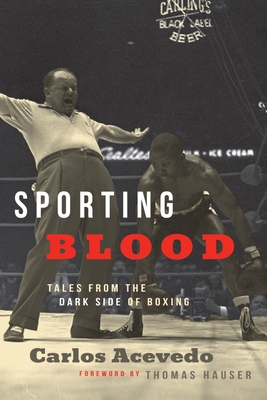 Tales from the Dark Side of Boxing

"Carlos Acevedo is the most original, perceptive, and best new writer in boxing. Sporting Blood is a vivid and gripping collection."--Donald McRae, writer for The Guardian and author of Dark Trade: Lost in Boxing

...this book may cement Acevedo's] status as one of today's best boxing journalists.--Kirkus Reviews

Boxing's literary tradition is perhaps the richest in sports. From A. J. Liebling to Donald McRae, the sweet science has consistently inspired great sportswriting. The work of Carlos Acevedo stands firmly in that honored tradition.

Sporting Blood is ultimately a poetic throwback, an uncanny book that evokes journalism's golden age and places Acevedo not only among the best sportswriters of this generation, but of any other as well.