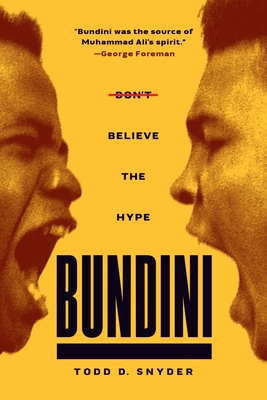 "Mr. Snyder writes lyrically, and his research appears to be impeccable: It's hard to imagine that anyone has slipped through his interview net...When Bundini died...Ali was abroad and unable to attend the funeral, but he sent flowers with a card that read: 'You made me the greatest.' Many members of the boxing fraternity, George Foreman and Larry Holmes included, think that Ali wasn't exaggerating. Mr. Snyder's affecting portrait will convince the rest of us as well."--Gordon Marino, Wall Street Journal

"I think Bundini was the source of Muhammad Ali's spirit. I wouldn't even call him a trainer or cornerman, he was more important than a trainer. Ali had an unmeasurable determination and he got it from Bundini."--George Foreman

"Bundini gave Ali his entire heart. Bundini played a very important part in Ali's career. He was Ali's right hand man. He knew exactly how to motivate him. He was the one guy who could really get him up to train and get him ready to fight."--Larry Holmes

Fifty years after he coined the iconic phrase Float like a butterfly, sting like a bee, Drew "Bundini" Brown remains one of boxing's most mysterious and misunderstood figures. His impact on the sport and the culture at large is undeniable. Cornerman and confidant to two of the greatest fighters ever--Sugar Ray Robinson and Muhammad Ali--Brown lived an extraordinary American life.

After a poverty-stricken childhood in Jim Crow Florida, Brown came of age traveling the world as a naval steward. On being discharged, he settled in New York City and spent wild nights in the jazz joints of Harlem, making a name for himself as the charismatic street philosopher and poet some called "Fast Black." He married a white woman from a family of Orthodox Jewish immigrants, in dramatic defiance of 1950s cultural norms, and later appeared in films such as the blaxploitation classic, Shaft.

In Bundini, Todd Snyder digs deep into Brown's expansive story, revealing not only how he became Muhammad Ali's "hype man," but also, as boxing's greatest motivator, how he became a model for others who seek to inspire, in any endeavor.