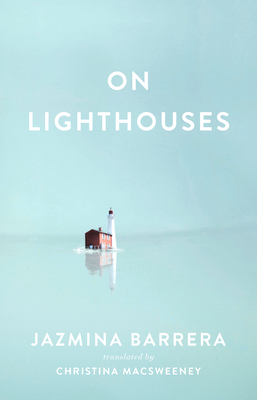 “Jazmina Barrera’s On Lighthouses is a thoughtful, lovely meditation on isolation and connection. She travels the world, meeting friends, kin, strangers, and historical figures, all while seeking out lonely lighthouses and digging deep into her solitary ‘collecting’ process. The book is as liminal as its subject — separate from others, but in service to them; not urgent, but just possibly the single slight thing needed to keep a reader from the rocks.”
— Helen Zuckerman, Community Bookstore, Brooklyn, NY
View the List

"This book is a light at the end of the tunnel." --The Paris Review

Far from home, in the confines of a dim New York apartment where the oppressive skyscrapers further isolate her, Jazmina Barrera offers a tour of her lighthouses--those structures whose message is "first and foremost, that human beings are here."

Starting with Robert Louis Stevenson's grandfather, an engineer charged with illuminating the Scottish coastline, On Lighthouses artfully examines lighthouses from the Spanish to the Oregon coasts and those in the works of Virginia Woolf, Edgar Allan Poe, Ingmar Bergman, and many others.

In trying to "collect" lighthouses by obsessively describing them, Barrera begins to question the nature of writing, collecting, and how, by staring so intently at one thing we are only trying to avoid others. Equal parts personal memoir and literary history, On Lighthouses takes the reader on a desperate flight from raging sea to cold stone--from a hopeless isolation to a meaningful one--concluding at last in a place of peace: the home of a selfless, guiding light.