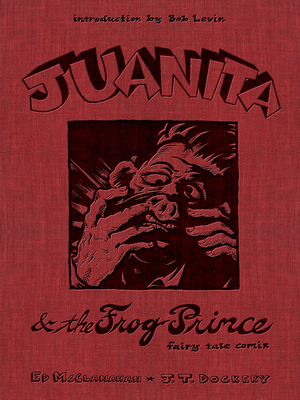 Juanita and the Frog Prince

A miscreant, misanthrope, and misfit, two-nosed Luther Jukes lands in jail for murdering a man who insulted his froglike facial features. As Luther schemes in his cell, "hoosegow scullery maid" Juanita Sparks frets over an unwanted pregnancy. But there may be a bit of magic that can sort out this mess.

In the style of underground comix, Ed McClanahan and J. T. Dockery present Juanita and the Frog Prince, an outrageous tale adapted from McClanahan's novella of the same name, originally published in A Congress of Wonders. Set in 1940s Kentucky, Juanita features a cast of characters trying to get ahead at all costs, including the Right Reverend Philander Cosmo Rexroat, redheaded rich boy Warren Harding Skidmore, and "Bad-Cess" Sallie Jukes, the town apothecary rumored to have "access to sinister forces." Rendered in bold strokes of ink that swirl from panel to panel, Luther's and Juanita's stories become further entangled until, in desperation, they attempt to harness the power of a lucky toadstone to create their own fairytale ending -- or do they?

Juanita and the Frog Prince is a southern Gothic psychedelic trip of a comic that will enrapture readers until the stroke of midnight -- and the final KLANG of the clocktower bell.

Ed McClanahan is a native of northeastern Kentucky and the author of several books, including The Natural Man and Not Even Immortality Lasts Forever. He is editor of Spit in the Ocean #7: All About Kesey, a memorial collection of writings about the late Ken Kesey. His work has appeared in magazines such as Esquire, Rolling Stone, and Playboy. He has also been awarded a Wallace Stegner Fellowship in creative writing at Stanford University, two Yaddo Fellowships, and an Al Smith Fellowship.J. T. Dockery is a cartoonist whose works include In Tongues Illustrated, Spud Crazy (with Nick Tosches), and DESPAIR, volumes 1--3. His adaptations of Stephen Crane poems from The Black Riders and Other Lines in volume 1 of DESPAIR were recognized in the annual "Notable Comics" list by series editor Bill Kartalopoulos in The Best American Comics 2014.
Loading...
or support indie stores by buying on
(This book is on backorder)