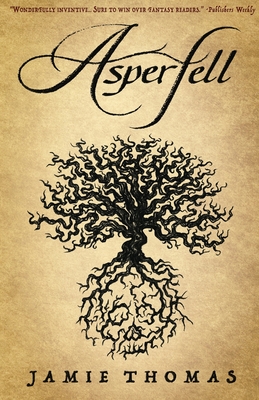 Only the darkest and most dangerous of Mages are sentenced to pass through the gate to Asperfell.

Not one has ever returned.

Never did Briony dream she might set foot in the otherworldly prison of Asperfell. She was, after all, neither Mage nor criminal. She was simply her father’s little whirlwind—fingers smudged with ink, dresses caked with mud—forever lost in a book or the spirit-haunted woods surrounding her family’s country estate.

But Briony always had a knack for showing up where she was least expected.

Only by braving the gate of Asperfell could Briony hope to find the true heir to the throne of Tiralaen and save her kingdom from civil war. And so, she plunges into a world of caged madmen and demented spirits, of dark magic and cryptic whispers... and of a bleak and broken prince with no interest in being rescued.

Hauntingly beautiful and lavishly told, Asperfell is a must-read for fans of Jane Austen who always wished she’d dabbled in blood magic.

“The wonderfully inventive first installment in Thomas’s debut trilogy winningly combines the comedy of manners found in Regency romances with the high spirits of magical school adventure fantasies. […] The charming characters, understated romance that simmers between Briony and Elyan, and easily graspable politics are all well-rendered, but the true star here is the strange, mystical setting of Asperfell. This promising adventure has crossover YA appeal and is sure to win over fantasy readers.” -Publishers Weekly

Jamie Thomas began crafting stories in the fourth grade with a tale of a brother and sister who accidentally bring the birds on their hotel wallpaper to life. Even though she ended with the cliched "It was all a dream" gimmick, she still won a regional young writers competition that year, thus beginning a lifelong love affair with the written word.

A certified Language Arts teacher in the state of Washington, Jamie holds a Master's degree in English Education and did her graduate research in the area of gender equality in high school literary curriculum. Jamie is an avid lover of Victorian novels and poetry, Gothic Romanticism, and feminist literature, as well as epic female-led fantasy and historical fiction. Jamie aims to smash the patriarchy one novel at a time, creating characters and worlds that inspire, empower, and elevate women.

Previously, Jamie studied opera and received her formal training at the University of Montana and the San Francisco Conservatory of Music, and she still enjoys performing occasionally, as well as teaching vocal technique. She lives in Wenatchee, Washington, with her husband, daughter, two enormous dogs, and two mischievous cats.

In July 2019, Jamie signed with Uproar Books, a new publisher of science fiction and epic fantasy novels. Asperfell, Jamie's debut novel, will be released in fall 2019