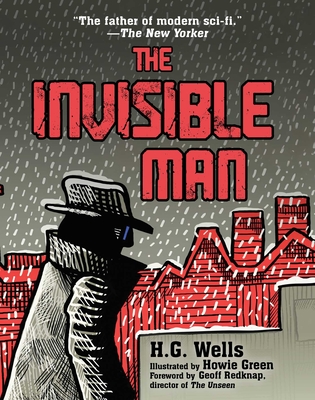 With an all-new illustrations, experience this classic pioneering tale of science fiction by H.G. Wells.

West Sussex. A mysterious man in a long-sleeved trench coat, gloves, and a wide-brimmed hat arrives at Mr. and Mrs. Hall's inn. His face is almost entirely concealed (much like most of his personality and identity), except for a fake pink nose. He keeps to himself, working in his rooms during the day, only leaving at night.

Griffin's peculiar habits quickly make him the talk of the town. After his landlady demands he pay his rent, he reveals his invisibility to her. In an altercation, the invisible man is forced out of the inn without his scientific equipment and notebooks. He sheds his clothing, but arms himself with an iron pipe. After being trailed by a stranger who accidentally pushes him into the bushes, the invisible man commits his first murder. Soon he meets Thomas Marvel and recruits him to be his assistant. But Marvel has other plans and reports Griffin to the police.

Outcast and deranged, the invisible man takes shelter in the house of Dr. Kemp, a former acquaintance from medical school. There, he reveals his true identity, the origins of his invisibility, and his plot for revenge. Meanwhile, Kemp has already reported Griffin to the authorities, and tragedy ensues.

Originally published in 1897, The Invisible Man is considered a landmark work of H.G. Wells and helped established him as the father of science fiction. Prepare to be captivated by the stunning new art by renowned illustrator, Howie Green, in this handsome new edition of a time-honored tale.

H.G. Wells is often considered the father of science fiction, his seminal work being The Invisible Man. He also authored The War of the Worlds and The Time Machine, among other works now considered classics.

Howie Green came to international attention with the publication of his first book Jazz Fish Zen. His work has garnered over forty-five awards and won Absolut Vodka's 25th Anniversary art competition in Boston, MA. Howie's work has been featured in over forty solo and group shows. He has created over fifty public art pieces and murals including three Cow Parade figures, a holiday mural for Boston City Hall, four giant golf balls for the PGA Tour in Rochester, NY, and two of his car designs were chosen as finalists in Volkswagen Polo's design competition in Copenhagen, Denmark.

Geoff Redknap is a writer and director with twenty-five years of experience in film and television as a special makeup effects artist and puppeteer. Geoff has worked on over eighty film and television projects, including: Ghostbusters: Afterlife, Terminator: Dark Fate, Deadpool 1 & 2, The Predator, I,Robot, Watchmen, and The X-Files. As a writer/director, his award-winning short films played festivals all over the world, as did his critically-acclaimed feature film The Unseen, a dramatic sci-fi thriller that reimagined H.G. Wells’ The Invisible Man.
Loading...
or support indie stores by buying on