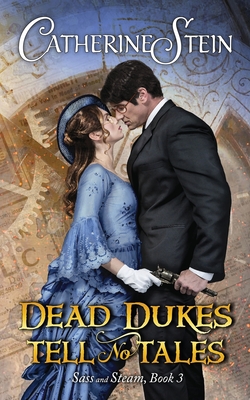 Airship pirates, mysterious inventions, and a treasure beyond compare? All in a duke's work.

Chicago scrap metal mogul Clifford Kinsley has never encountered an obstacle he couldn't dismantle. Until he inherits a dukedom burdened with mountains of debt, stifling rules, and people who want to ship his seven-year-old daughter off to boarding school. He's stuck with the title for life. Which leaves only one solution: kill the duke. And for that, he'll need the assistance of a professional.

Sabine Diebin, the infamous pirate captain La Capitaine, has one final treasure to find before she settles down to a well-deserved retirement. Unfortunately, the key to finding her prize is buried somewhere in the mess left behind by the late Duke of Hartleigh. To speed up her search, Sabine makes a deal with the oddly charming new duke-next-door. If he digs through her clutter, she'll help him disappear.

Working together, Cliff and Sabine uncover a trail of clues that sends them on a world-wide search for a potentially life-changing device. With their combined skills, they can dodge murderous enemies and unravel baffling messages, but they can't deny their growing bond or the desire sparking between them. Pirates don't have partners. But if they dare to open their hearts, they might discover that the greatest treasures of all can't be buried.