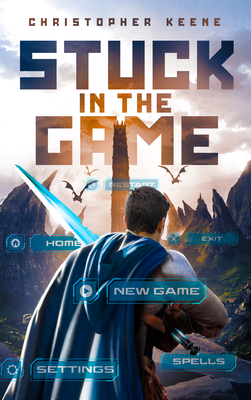 Stuck in the Game

Noah promised himself he would never play the world’s most popular MMORPG—the Dream State. He’d already lost too many friends to the addictive virtual world.
But after a devastating car crash leaves Noah paralyzed, he’s forced inside the game. The Dream State not only provides a connection with the outside world but also keeps his brain awake long enough for his body to heal. Dying in the game, however, could send Noah into a coma forever. To stay safe, he must remain in the lower levels, far away from the most dangerous monsters and players.
Meanwhile, doctors grow concerned when Noah’s girlfriend, Sue—who also sustained serious injuries in the crash—seemingly fails to connect to the game. When a mysterious avatar suggests to Noah that the last remnants of Sue’s consciousness are being held prisoner in the highest level, Noah decides to risk everything to save her.
Leaving the safety of the lower levels, Noah rises through the ranks and enters the most dangerous part of the game, allying with high-level players and unearthing clues to a sinister plot along the way. Now top players from across the world are hunting him.
With his life on the line, can Noah save Sue and uncover the mystery?


Praise For Stuck in the Game…

"An interesting new take on a classic concept and one of the few young adult-friendly LitRPGs out there. In Stuck in the Game, things are not what they seem!" —Apollos Thorne, author of Codename: Freedom and Underworld: Level Up or Die!

"Fans of LitRPG and video games need to be reading Christopher Keene." —Paul Mannering, President of SpecFicNZ, author of Engines of Empathy

“Keene’s Stuck in the Game is a fun romp through a great fantasy world. The premise is unique, the pacing superb, the action tight. The pages turn themselves!” —Harmon Cooper, author of The Feedback Loop series, Fantasy Online series, and The Last Warrior of Unigaea trilogy

Growing up in the small town of Timaru, New Zealand, Christopher Keene broke the family
trend of becoming an accountant by becoming a writer instead. While studying for his
Bachelor of Arts in English Literature from the University of Canterbury, he took the
school’s creative writing course in the hopes of someday seeing his own book on the shelf in
his favorite bookstores.
In his spare time, he writes a blog to share his love of the fantasy and science fiction genres in
novels, films, comics, games, and anime (fantasyandanime.wordpress.com).