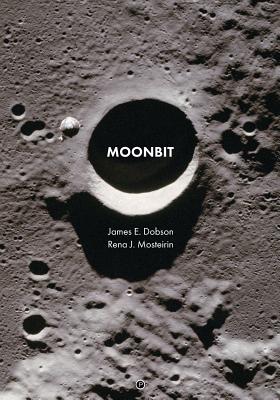 MOONBIT is a hybrid work comprised of experimental poetry and a critical theory of the poetics and politics of computer code. It offers an extended intellectual and creative engagement with the affordances of computer software through multiple readings and re-writings of a singular text, the source code of the Apollo 11 Guidance Computer or the "AGC." MOONBIT re-marks and remixes the code that made space travel possible. Half of this book is erasure poetry that uses the AGC code as the source text, building on the premise that code can speak beyond its functional purpose.

When we think about the 1960s U.S. space program and obscure scientific computer code, we might not first think about the Watts riots, Shakespeare, Winnie the Pooh, T.S. Eliot, or scatological jokes. Yet these cultural references and influences along with many more are scattered throughout the body of the code that powered the compact digital computer that successfully guided astronauts to the Moon and back and in July of 1969. MOONBIT unravels and rewrites the many embedded cultural references that were braided together within the language resources of mid-century computer code.

MOONBIT also provides a gentle, non-expert introduction to the text of the AGC code, to digital poetics, and to critical code studies. Outlining a capacious interpretive practice, MOONBIT takes up all manner of imaginative decodings and recodings of this code. It introduces some of the major existing approaches to the study of code and culture while provide multiple readings of the source code along with an explanation and theorization of the way in which the code works, as both a computational and a cultural text.

JAMES E. DOBSON teaches at Dartmouth College. He is the author of "Critical Digital Humanities: The Search for a Methodology" (Illinois, 2019) and "Modernity and Autobiography in Nineteenth-Century America: Literary Representations of Communication and Transportation Technologies" (Palgrave, 2017), as well as essays and book chapters on intellectual history, American literature, and computational methods.

RENA J. MOSTEIRIN is the author of "Nick Trail's Thumb" (Kore Press, 2008), selected for the Kore Press Short Fiction Chapbook Award by Lydia Davis. Her work has been featured in the anthologies "code {poems}" (Barcelona: Impremta Badia, 2012), "The Waiting Room Reader II" (Fort Lee: Cavankerry Press/UPNE, 2013), and a wide variety of places in print and online including New York Magazine, The Puritan, Poetry Crush, Ozone Park, and elsewhere. Mosteirin is a graduate of Dartmouth College and the Bennington Writing Seminars. She is an editor at Bloodroot Literary Magazine.