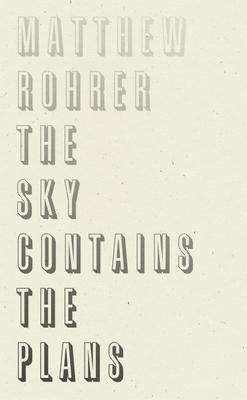 The Sky Contains the Plans

Matthew Rohrer's latest collection explores the space between wakefulness and sleep, that drowsy loosening of consciousness called hypnagogia. Comprised not of dream-poems but poems that strain to hear dreams' faintest messages squeaked through into waking life, The Sky Contains the Plans lays bare an imagination in which the mundane and surreal contort each other into a new kind of primordial reality.

Matthew Rohrer is the author of The Others (Wave Books, 2017, winner of the Believer Book Award), Surrounded by Friends (Wave Books, 2015), Destroyer and Preserver (Wave Books, 2011), A Plate of Chicken (Ugly Duckling Presse, 2009), Rise Up (Wave Books, 2007) and A Green Light (Verse Press, 2004), which was shortlisted for the 2005 Griffin Poetry Prize. He is also the author of Satellite (Verse Press, 2001), and co-author, with Joshua Beckman, of Nice Hat. Thanks. (Verse Press, 2002) and the audio CD Adventures While Preaching the Gospel of Beauty. He has appeared on NPR's All Things Considered and The Next Big Thing. His first book, A Hummock in the Malookas, was selected for the National Poetry Series by Mary Oliver in 1994. He lives in Brooklyn and teaches at NYU.
Loading...
or support indie stores by buying on