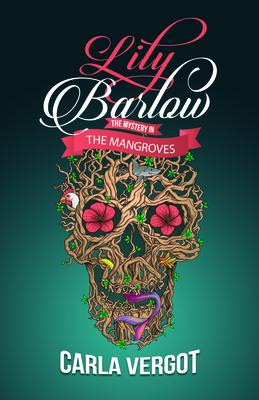 The Mystery in the Mangroves

Lily Barlow came back to her sleepy hometown of Marshall, Virginia, for one reason and one reason only--to rescue her family's bakery from financial ruin after her dad's heart attack.

She successfully managed that without even donning an apron, but before heading back down to the University of Virginia, Lily unraveled a case of mistaken identity. She uncovered some evidence that her elderly landlady, Miss Delphine, is up to something, and got blindsided by her best friend, Jack Turner, who suddenly declared he and Lily should start dating. How's that for a week of being home?

The identity of the woman with the purple flower tattoo remains a mystery, however. Pouring over a website that tracks unidentified murder victims, Lily got sucked into the profile of a woman whose decapitated body was found in a Florida swamp. The victim wasn't Lily's acquaintance after all, but she is haunted by the fact that this woman remains nameless. Lily and her friend, Storie Sanders, pursue a lead that draws them from the quiet backroads of Virginia to the tropical mangroves of the Keys. Things take several unexpected turns as they work their way deeper into the mystery. Is their investigation leading them dangerously close to the murderer himself?

A devotee of Stephanie Plum, Lily is inspired by this chain of events and starts to wonder if she could go from an amateur sleuth to a professional one, or at the very least get a minor in sleuthing. You gotta start somewhere, right? After all, she's certain Mis Delphine is busy burying bodies out back, and if she just had a little more crime scene training, she could probably blow that case sky high. Not that she necessarily wants to bust a crazy old lady who has been nothing but kind, letting her live rent-free in the efficiency apartment above the garage. Regardless, Miss Delphine is hiding something. Or is it someone?

Lily's dad, George Barlow, is recovering quite nicely from his heart attack, although Lily is stuck in alert mode. She lost her mama at the age of six and is painfully aware that she's one parent away from orphan status, even if she is a legal adult at this point. Maybe the University of Virginia in Charlottesville is too far away to keep tabs on her dad. It's only a two-hour drive, but that seems like forever when your dad is being taken by ambulance to the hospital. If she moved back to the stifling little town, would she go completely bonkers?

And what in the name of fishing lures and French fries is going on with Jack these days? This whole change in their status is bizarre. They've been best friends since kindergarten, never having tested the waters of a physical relationship. That's probably because the brotherly/sisterly bond was so strong. Jack has clearly lost his mind with this crazy suggestion the two start dating. He's taking his Principle of Proximity way too far, crossing every line Lily can manufacture with his neck smelling and his eye contact and his powers of seduction. Her gut says this is a risky little game that could cost her the most important person in her life. Her instinct is to tell him it's a hard no on the dating question even if the romance is simmering down in the Keys. Is the Florida heat playing tricks on her or is Jack winning?

As if she didn't have enough to keep her occupied between Jack, the family crises, school starting back up...and you know...murder victims, a curious question surrounding her dead mama, Connie Barlow, has suddenly surfaced. There's a missing piece in that puzzle, but where should she look?

Carla Vergot took a sabbatical from teaching special education in Virginia to write the first book in the Lily Barlow series-The Mystery of Jane Dough. She enjoyed the experience so much that she permanently resigned from the public school system to work on the second book-The Mystery in the Mangroves. The story follows quirky Lily Barlow as she stumbles into her next adventure, but Carla worked to create a stand-alone experience, so if you haven't read book one yet, you'll slip right in.
Loading...
or support indie stores by buying on