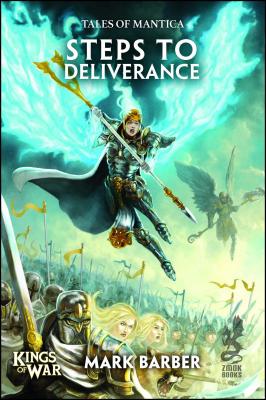 Steps to Deliverance (Kings of War)

The first novel based in the Kings of War universe

Over a decade after violating his ruthless orders from his superiors in the Basilean military, ex-legion captain Dionne emerges from hiding in the Mountains of Tarkis, leading a force of rebels against the dark forces of the Abyss. Desperate to clamp down on the popular rebel leader, the Basilean Duma dispatches a force to bring the former legion officer to justice. Leading the paladins of this force is Tancred, freshly promoted and harboring political ambitions of his own. Under the brutal leadership of Hugh, the commander of the force, Tancred must struggle to find the balance between obeying orders, following the path of righteousness, and advancing his own ambitions.

Assisting Tancred is Orion, a violent and dangerous paladin carrying a personal vendetta with Dionne; Constance, a tough and determined mercenary sharing a dark history with Hugh; Aestelle, a lone adventurer whose unique skills betray a mysterious past, and Valletto, a veteran legion mage thrown into the front line against his will.

Tancred and Orion must fight the rebels and their sympathizers whilst battling against the politics threatening to tear their force apart from within. They must do battle from the open plains of northern Basilea to the ancient caves below the Mountains of Tarkis, fighting all who cross their path as they give chase to a deadly and determined rebel. And all the while, the dark and deadly influence of the demonic forces of the Abyss continues to play its hand, manipulating events and people alike from afar…

Mark Barber is an active naval officer who has written books and articles on history and SF&F.  His first book, "Markov's Prize" was published in June 2018.
Loading...
or
Not Currently Available for Direct Purchase