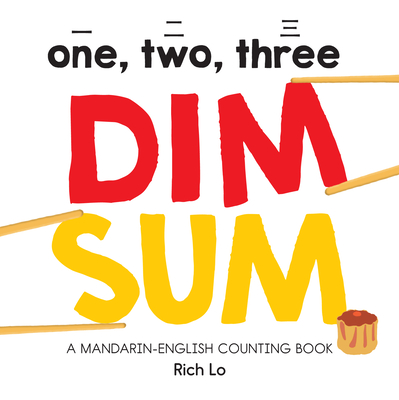 Children and their parents can learn to count to ten in both English and Mandarin in this fun bilingual counting book of food.

This book features traditional Chinese food items paired with numbers in both English and Chinese. Illustrated by Rich Lo, you'll learn two is for chopsticks, five is for egg rolls, and nine is for sweet buns, and since the numbers are shown in both simplified and traditional Chinese and English, learning is both easy and fun.

Starred Review: "Baby-Toddler-Items and small dishes restaurant-goers are likely to find on their table are served up in this delectable offering. Each picture of an object (one menu, two chopsticks, etc.) or food (four shumai, eight rangoons, and so on) presents the corresponding numeral with labels in English and simplified and traditional Chinese. Yum." —School Library Journal

Born in Canton, China, Rich Lo was always drawing and painting with his six siblings. At the age of seven, he and his family emigrated from Hong Kong to the United States and eventually settled in Chicago’s Chinatown. An accomplished illustrator and fine artist, his work can be found on packaging and ads for national brands and on large installations in public buildings throughout the Midwest. Rich’s first picture book Father’s Chinese Opera, about his relationship with his opera composer father, was published by Sky Pony Press (2014), and named an ALA Asian Pacific American Award for Literature Honor Book. Rich is also the author-illustrator of New Year, published by Sky Pony Press (2016), the illustrator of Mountain Chef: How One Man Lost His Groceries, Changed His Plans, and Helped Cook Up the National Park Service, published by Charlesbridge (2016), winner of the Carter G. Woodson Book Award, and Dim Sum—A Mandarin English Counting Book.
Loading...
or support indie stores by buying on