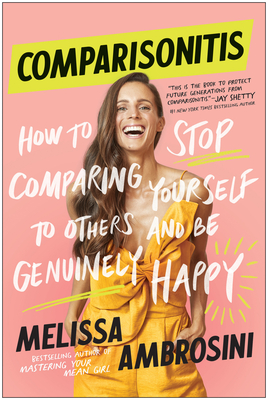 How to Stop Comparing Yourself to Others and Be Genuinely Happy

It creeps up on you without warning--perhaps while chatting with a friend, scrolling through social media, or even just while walking down the street.

All it takes is the hint of someone doing or having something you perceive as "better" than you, and it hits. A feeling takes over--intense, blinding, gutting. Your brain starts spinning with toxic thoughts about yourself (or others), and you're left feeling ashamed, guilty, and even worthless.

It's called comparisonitis. And if you've suffered from it, you're NOT alone.

Comparisonitis is a contagious, socially transmitted condition that occurs when you compare yourself to others so frequently and fiercely that you're left paralyzed, with your confidence in tatters and your self-worth plummeting. It may sound trivial, but this affliction can have serious adverse effects on our mental health, leading to depression, anxiety, overthinking, and regret.

To make matters worse, our comparison culture is only expanding. Thanks to social media, we have more opportunities to compare ourselves than ever before, and even kids are falling into the trap.

From bestselling author Melissa Ambrosini, Comparisonitis puts this toxic condition under the microscope, unpacking the symptoms, and offering practical tips you can start using immediately to break the cycle of comparison, free up mental bandwidth, and live life on your own terms.

Described as a "self-help guru" by Elle magazine, Melissa has experienced the effects of comparisonitis first hand, having worked extensively in industries like acting, modeling and dancing where comparison culture is not only rampant but openly encouraged.

Melissa knows all too well how comparisonitis is infecting our minds and hurting our hearts, and in this book, she'll help you heal from this disease, liberate your headspace, and raise your self-worth so radically that you'll never let comparison rob you of your joy and happiness again.

Melissa Ambrosini is the bestselling author of Mastering Your Mean Girl, Open Wide, and the Audible Original PurposeFULL. Described as a "Self-Help Guru" by Elle Magazine, she is a speaker, self love teacher and entrepreneur. She's also the host of the top-rated podcast The Melissa Ambrosini Show, where she shares her wisdom and interviews world-class performers and experts from around the globe including Seth Godin, Wim Hof, Sir Ken Robinson, Bruce Lipton, John Gray, and Jack Canfield. Melissa is uniquely positioned to blow the lid off the toxic disease of comparisonitis, having worked extensively in industries where comparison culture is not only rampant, but openly encouraged--including a decade treading the boards as a successful actor, model and dancer (including a year-long stint performing at the Moulin Rouge in Paris), before "accidentally" becoming a social media influencer with hundreds of thousands of followers. Melissa is married to a rockstar (literally), and currently lives in Australia with her husband Nick Broadhurst and bonus son.
Loading...
or support indie stores by buying on