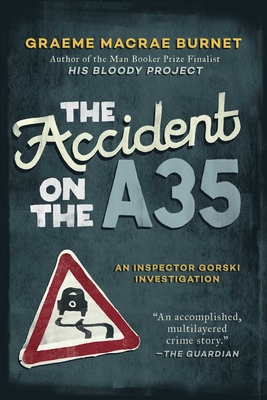 The Accident on the A35

The Accident on the A35 returns to the scene of Burnet’s accomplished first novel, The Disappearance of Adèle Bedeau: the small French town of Saint-Louis. Detective Gorski is called away from his night of solitary drinking to the site of a car accident that left Bertrand Barthelme, a respected solicitor, dead. When the deceased's rather attractive wife suggests that the crash may not have been an accident, Gorski looks closer into Barthelme's circumspect movements on the night of his death. His investigation leads him to various bars, hotels, and brothels in the nearby city of Strasbourg. At the same time, Barthelme's rebellious son, drunk on Jean Paul Sartre novels, is conducting an investigation of his own. Their independent, dual inquiries lead the reader down a twisted road marked by seedy back rooms, bar brawls, a moment of accidental incest, and--as we have come to expect from Burnet--copious amounts of wine.

The Accident on the A35 is a darkly humorous, subtle, and sophisticated novel that burrows into the psyches of its characters and explores the dark corners of life in a sleepy town.

Praise For The Accident on the A35: An Inspector Gorski Investigation…

“Reminiscent of Inspector Maigret novels by Georges Simenon, Mr. Burnet's Gorski chronicles—this is his second—are memorable works of art in their own right.” —Wall Street Journal, Best Mysteries Pick of 2018

“The Man Booker Prize finalist spins another tale within a tale . . . of domestic intrigue in backwater France with two appealing detective figures.”—Kirkus

"It's a long time since I read a police procedural (more or less) that was so gripping and intelligent."—Philip Pullman

“A masterful psychological thriller.”—Ian Stephen, author of A Book of Death and Fish

“Psychologically astute and convincingly grounded in its environment, this study of petty persecution and murder is a fine achievement from an ambitious and accomplished writer.”—The National

“Masterful, clever and playful . . . one of the most experimental and assured authors currently writing in Scotland.”—Louise Hutcheson, A Novel Bookblog

“One of the most enjoyable and involving novels you'll read this year.”—Alistair Braidwood, Scots Wha Hae

Graeme Macrae Burnet has established a reputation for smart and literary mystery writing with his highly praised novel, His Bloody Project, which was a finalist for the Man Booker Prize and the Los Angeles Times Book Award. He was born and brought up in Kilmarnock and has lived in Prague, Bordeaux, Porto, and London. He now lives in Glasgow, Scotland.
or support indie stores by buying on