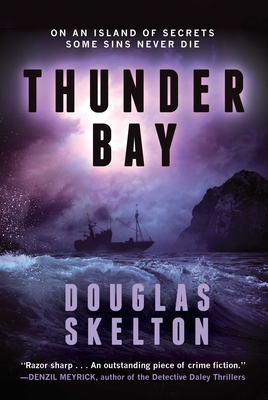 Stoirm Island’s secrets are worth killing for in this immersive, unrelenting thriller for readers of All the Missing Girls and Neon Prey—"this crime novel has it all" (Publishers Weekly, starred review).

When reporter Rebecca Connolly gets a tip that suspected murderer Roddie Drummond will be returning to the island of Stoirm, she smells a story. Though never convicted in the death of his girlfriend Mhairi fifteen years earlier, Drummond is still guilty in the eyes of many islanders, and his return for his mother’s funeral is sure to stir up old resentments, hatreds, possibly even violence. Rebecca has another reason for going to Stoirm. Her own father came from there, but he never went back, and he always refused to speak of it or say what drove him away.

Defying her editor, Rebecca joins forces with local photographer Chazz Wymark to dig into the mystery surrounding Mhairi's death and her unexplained last words, “Thunder Bay”—the secluded spot on the west coast of the island where, according to local lore, the souls of the dead set off into the afterlife. When a string of violent events erupts across the island, Rebecca discovers the power of secrets, and she must decide what to bury, and what to bring into the light.

Longlisted for Bloody Scotland's McIlvanney Prize for best crime book of the year, Thunder Bay has been hailed as "Immersive, compelling . . . [with a] jaw-dropping climax" (Neil Broadfoot, author of the MacGregor and Drummond thrillers).).

“Did Roddy kill his girlfriend, Mhairi? . . . On the way to figuring this out, there are a lot of deep, dark—and I mean dark—secrets that are uncovered. . . . Almost everyone on this island is hiding something terrible. . . It's the type of crime fiction that Irish and Scottish writers do particularly well.”—Inside Flap

"A surprisingly gripping read. I had no idea where things were going to end up, . . . Skelton’s characters kept bucking expectations as they tried to stick to Stoirm’s “ethical” code. . . . Readers looking for something out of the ordinary and atmospheric might like this one."—A Bookish Type

"Razor sharp . . .An outstanding piece of crime fiction. Not to be missed."—Denzil Meyrick, author of the Detective Daley thrillers

"A gripping and thrilling read from one of the great Scottish crime writers, themes of crime, mystery, secrecy and loyalty all woven together to make Thunder Bay one of those books that will stay with you long after you ve turned the last page."—Kate Noble, The Quiet Knitter

Douglas Skelton was born in Glasgow. He has been a bank clerk, tax officer, taxi driver (for two days), wine waiter (for two hours), journalist, and investigator of real-life crime for Glasgow solicitors. He has written eleven true crime and Scottish criminal history books but now concentrates on fiction. His novels Open Wounds and Thunder Bay, the first Rebecca Connolly thriller, were longlisted for the McIlvanney Prize for best crime book of the year. He lives in southwest Scotland.
Loading...
or
Not Currently Available for Direct Purchase