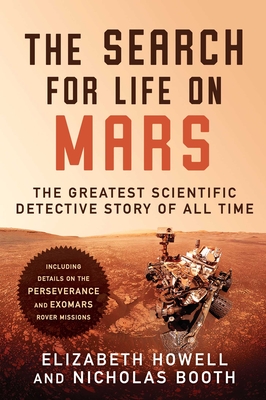 The Search for Life on Mars

The Greatest Scientific Detective Story of All Time

With a focus of the Perseverance rover mission, here is the  "Quintessential account of one of humanity’s most intriguing quests" (Pail Halpern, Medium), "A remarkable, timely, and up-to-date account of Mars exploration" (Leonard David, "Space Insider," Space.com).

From The War of the Worlds to The Martian and to the amazing photographs sent back by the robotic rovers Curiosity and Opportunity, Mars has excited our imaginations as the most likely other habitat for life in the solar system. Now the Red Planet is coming under scrutiny as never before. As new missions are scheduled to launch this year from the United States and China, and with the European Space Agency's ExoMars mission now scheduled for 2022, this book recounts in full the greatest scientific detective story ever.

For the first time in forty years, the missions heading to Mars will look for signs of ancient life on the world next door. It is the latest chapter in an age‑old quest that encompasses myth, false starts, red herrings, and bizarre coincidences—as well as triumphs and heartbreaking failures. This book, by two journalists with deep experience covering space exploration, is the definitive story of how life's discovery has eluded us to date, and how it will be found somewhere and sometime this century. The Search for Life on Mars is based on more than a hundred interviews with experts at NASA’s Jet Propulsion Laboratory and elsewhere, who share their insights and stories. While it looks back to the early Mars missions such as Viking 1 and 2, the book's focus is on the experiments and revelations from the most recent ones—including Curiosity, which continues to explore potentially habitable sites where water was once present, and the Mars Insight lander, which has recorded more than 450 marsquakes since its deployment in late 2018—as well as on the Perseverance and ExoMars rover missions ahead.

And the book looks forward to the newest, most exciting frontier of all: the day, not too far away, when humans will land, make the Red Planet their home, and look for life directly.

Praise For The Search for Life on Mars: The Greatest Scientific Detective Story of All Time…

"The search [for life on Mars] retains an irresistible fascination, and this enthusiastic account brings readers up to date."—Kirkus Reviews

"Important and fascinating . . . Howell and Booth have a journalists’ flair for elucidating the human side of an extraordinary chronicle that is far from over. In short, The Search for Life on Mars is the quintessential account of one of humanity’s most intriguing quests."—Pail Halpern, Medium

"This book is a captivating, behind-the-scenes view of scientists and engineers on the frontlines of opening up the Red Planet to breakthrough discoveries  . . . and still puzzling observations. The authors have written a remarkable, timely, and up-to-date account of Mars exploration. More importantly, this milestone book is a guidepost of things to come and the next steps needed to purge that distant globe of its stealthy truths."—Leonard David, Space.com’s "Space Insider" columnist and author of Moon Rush: The New Space Race

"As a career-long employee of NASA, and one deeply involved in human space exploration, I found this book filling a void in my understanding and adding to my appreciation for the true scientists and leaders of NASA’s extraordinary Mars exploration programs.The Search for Life on Mars is an extremely fascinating book, weaving together our history of studying the Red Planet and hopes of discovering life there with the details of those missions as told by the people who actually did the work. It left me wanting a quicker answer to that age-old question. Any casual fan of Earth’s Mars exploration programs should read this book. All true students of these fantastic endeavors will devour this book."—Mike Leinbach, Shuttle Launch Director, retired, and coauthor of Bringing Columbia Home

"The Search for Life on Mars is a time machine, rushing readers into the Red Planet's past while providing a window into current and future explorations. From the lingering residue of a former magnetic field to the rolled stones that point to Mars' aquatic era, Elizabeth Howell and Nicholas Booth bring light to Earthwide research, exposing the building blocks of life present in and on the ground of our nearest neighbor. In a way that is clear to the novice but still refreshing for an expert, they show that there is a glimmer of hope — that we may not alone in our the solar system, not to mention the universe."—Allendria Brunjes, editor, SkyNews

"Exhilarating, frustrating, tantalizing, surprising, rewarding, confounding—Mars has emotionally whipsawed planetary scientists since Mariner 4’s first close look at the planet in 1965. The Search for Life on Mars takes us through the painstaking process of focusing our robotic explorations to unravel the mystery of whether life ever took a foothold on Mars. It’s a question we may finally see answered in the next decade, and one which helps us appreciate even more fully how life and Earth evolved together."—Jonathan H. Ward, Fellow of the Royal Astronomical Society and coauthor of Bringing Columbia Home

"Their approach and style are unique, they break many a convention of the scientific history books to make this a truly accessible read with none of the bluff and bluster of so many so-called popular-science books and all of the guts and glory of a gripping wannabe bestseller."—David Bradley, Sciencebase

Elizabeth Howell, PhD, is one of the few people who has lived on a simulated Mars base. An award-winning journalist, she regularly contributes to Space.com, Forbes, and SkyNews. She witnessed five human space launches—three from Florida and two from Kazakhstan. She also pretended to be a Red Planet astronaut in 2014, on Crew 133 of the Mars Society's Mars Desert Research Station in Utah. Elizabeth holds an undergraduate degree in journalism from Carleton University and two postgraduate degrees in space studies from the University of North Dakota. She lives with her husband in Ottawa, Canada.

Nicholas Booth worked for Astronomy Now magazine, wrote about science for British newspapers, and was a technology editor on The Times (London). He is the author of true-life detective stories about spies and fraudsters, including Zigzag: The Incredible Wartime Exploits of Double Agent Eddie Chapman, published by Arcade. He lives in Cheshire, England, with his wife and their two cats.
Loading...
or support indie stores by buying on