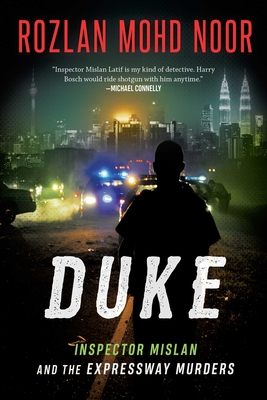 Inspector Mislan and the Expressway Murders

For fans of Jo Nesbø, Ian Rankin, and John Burdett, a gripping crime thriller that is steeped in the grit and feel of the street:
"Inspector Mislan Latif is my kind of detective. Harry Bosch would ride shotgun with him any time."—Michael Connelly

In the run‑up to the Eid holiday, the police department is drained of staff and the DUKE expressway jammed with vehicles, as many in Kuala Lumpur leave the capital to celebrate the end of Ramadan with their extended families. In the slow lane, a Mercedes E200 suddenly veers after several bright flashes and comes to rest against the guardrail. When the highway patrol arrives, what looked like a traffic accident turns out to be an apparent murder‑suicide of the driver and his female passenger, both having suffered gunshot wounds.

Yet, called to lend a hand with the investigation, Inspector Mislan finds something else again. The dead man and woman, a wealthy, politically connected entrepreneur and his business associate, were by all appearances engaged in a long-term affair, seemingly in love, and the crime scene doesn't add up for suicide. But then, if these two successful people were murdered, why? And how, when the car was locked from the inside? And why does the political establishment want the case closed in such an awful hurry? Once again, Mislan must find a way—with the help of his team and his politically savvy boss—to withstand the pressure from above, solve an impossible mystery, and ensure that justice prevails.

Praise For DUKE: Inspector Mislan and the Expressway Murders…

"Impressive . . . The combination of clever plotting and portrayal of life in Malaysia is a winner. Mohd Noor brilliantly integrates an unusual impossible crime into a gritty procedural story line."—Publishers Weekly, starred review

"Inspector Mislan Latif is my kind of detective. Harry Bosch would ride shotgun with him anytime."—Michael Connelly

"With 21 Immortals, Rozlan Mohd Noor proves that a great character can be found anywhere on the globe. Undaunted and determined, Inspector Mislan Latif is my kind of detective. Harry Bosch would ride shotgun with him any time."—Michael Connelly

"Stellar . . . Fans of honest cops working in a rigged system are in for a treat."—Publishers Weekly, starred review

"Written in terse prose with to-the-point dialogue, little gets in the way of Noor’s narrative momentum and he tears through the story’s investigation with a nimble touch. . . . Mohd Noor excels in writing about the minutiae of investigative procedure and makes crystal clear what we know and how we know it; if he wasn’t an expert in policing, one might guess he was a veteran journalist."—LA Review of Books

"Rozlan Mohd Noor's 21 Immortals is set in a vividly evoked contemporary Kuala Lumpur and has all the makings of a classic detective novel—a tough, engaging detective, a story that grips from the first page, and an ending that is just as intriguing and satisfying as you hoped it would be. Highly recommended."—W. C. Ryan, author of A House of Ghosts

"From a macabre murder scene to an unexpected ending, Noor effortlessly leads us through the complexities of a police investigation supercharged with corruption, politics, and unfettered egos. His style puts the reader always at Inspector Mislan’s side, discovering evidence and identifying suspects in the same breath. Nothing is predictable in this atmospheric story set in exotic Malaysia." —Timothy Jay Smith, author of Fire on the Island and The Fourth Courier

"As approachable as it is brilliant, 21 Immortals could and should become a classic of detective fiction. I like to think of Inspector Mislan Latif as Malaysia's Montalbano, not just for the love of food, coffee, and cigarettes, but for the wit, resolve, and humanity."—Davide Cazzaro, publisher of Nang magazine

"It has a great title, a wonderful mix of characters, and a complex story line that twists and turns like KL roads. . . .The pleasure in 21 Immortals arises from the fact the writer enjoys the storytelling. He is having fun, and it spills into the novel. He loves his hero. The unpretentious Inspector Mislan, who doesn’t ‘wear shades, or talk standing sideways,' is more likable than the lead in CSI Miami."—SH Lim, Time Out Kuala Lumpur

"Enter Inspector Mislan Latif; hard-boiled, tough as nails, logical, unsentimental, but not quite cynical. In a Kuala Lumpur full of dirty criminals and dirtier cops, he is the last among the few good men (and women) that remain. . . . 21 Immortals is deliberately paced. Rozlan Mohd Noor writes with a meticulousness that mirrors that of his protagonist. It is prose that is methodical. Carefully, systematically unraveling the murder mystery that lies before us. . . . He has written a novel that is for us; completely and utterly."—New Straits Times (Malaysia)

“The voices are real. They are ours or fragments of our society. . . . It is very courageous for a former officer of the Royal Malaysian Police to detail what could go wrong in police investigations. . . . The book is not of a world to be judged based on morality and accepted cultural norms. Rozlan is brave enough to offer this insight and his representations of changing values in modern Malaysia. . . . My final verdict: Go get the book!"—Asiatic Journal(Malaysia)

“Rozlan Mohd Noor's books are exceptionally good in a lot of senses but more importantly, they capture the subtleties and nuances of Malaysian culture, language, politics, and crime.21 Immortals is a highly recommended read.”—Choose and Book

“He is a maverick, badass investigator who is determined to solve all his cases despite pressure from his superiors and politicians to close them. The stories walk us through the procedures that take place when a crime is reported, how CSI and the police work together, and what are the challenges they face. Even more interesting is the fact the stories take Kuala Lumpur and its surroundings as their location. The author has injected some local dialect, the reality of Malaysia.”—purplymoon

“The books in Rozlan’s Inspector Mislan series deal with serious social issues, among them the corruption of higher-ups in the police force.”—The Star (Malaysia)

“21 Immortals highlights the commitment of Inspector Mislan, a cop who is honest, hardworking, and has integrity—but this attitude makes him unpopular among some of his colleagues and superiors on the police force and even politicians, making him a victim sometimes of internal politics in his department.”—Kosmo newspaper (Malaysia)

Rozlan Mohd Noor served for eleven years as a crime investigator in the CID of the Royal Malaysia Police and a court prosecutor before joining the private sector. 21 Immortals, his first Inspector Mislan novel, was shortlisted for the Commonwealth Writer’s Best First Book Award and longlisted for the International DUBLIN Literary Award. He has published three more Inspector Mislan novels and he’s working on the fifth. He currently resides in Thailand.
Loading...
or support indie stores by buying on