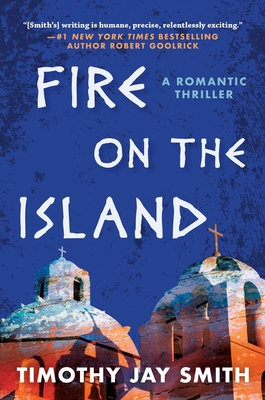 Fire on the Island

For lovers of crime fiction and the allure of the Greek islands, Fire on the Island is the perfect summer read.

FIRE ON THE ISLAND is a playful, romantic thriller set in contemporary Greece, with a gay Greek-American FBI agent, who is undercover on the island to investigate a series of mysterious fires. Set against the very real refugee crisis on the beautiful, sun-drenched Greek islands, this novel paints a loving portrait of a community in crisis. As the island residents grapple with declining tourism, poverty, refugees, family feuds, and a perilously damaged church, an arsonist invades their midst.

Nick Damigos, the FBI agent, arrives on the island just in time to witness the latest fire and save a beloved truffle-sniffing dog. Hailed as a hero and embraced by the community, Nick finds himself drawn to Takis, a young bartender who becomes his primary suspect, which is a problem because they’re having an affair. Theirs is not the only complicated romance in the community and Takis isn’t the only suspicious character on the island. The priest is an art forger, a young Albanian waiter harbors a secret, the captain of the coast guard station seems to have his own agenda, and the village itself hides a violent history. Nick has to unravel the truth in time to prevent catastrophe, as he comes to terms with his own past trauma. In saving the village, he will go a long way toward saving himself.

A long time devotee of the Greek islands, Smith paints the setting with gorgeous color and empathy, ushering in a new romantic thriller with the charm of  Zorba the Greek while shedding bright light on the very real challenges of life in contemporary Greece.


Praise For Fire on the Island: A Romantic Thriller…

In Praise of Fire on the Island:

"Fire on the Island is an unpredictable, unconventional thriller. A gay FBI agent who goes undercover to trace the arsonist terrorizing a Greek village once inhabited by Turks digs up roiling ethnic tensions, festering homophobia, and family secrets. Smith, clearly familiar with his setting, paints his island with vivid color and populates it with complex and compelling characters." —Jennifer Steil, author of Exile Music and The Ambassador's Wife

“I read Fire on the Island in one sitting. Smith’s prose is fast-paced, the dialogue is crisp, and the characters are well-drawn in a breathtaking setting. I highly recommend this book.” —Hasan Namir, author of God in Pink and War/Torn

"The characters of the small Greek island of Vourvoulos are the stars in Timothy Jay Smith’s compulsively readable mystery Fire on the Island. Athens-based FBI legal attaché Nick Damigos has come to Vourvoulos to investigate a series of dangerous fires, which may be connected to the flood of illegal immigrants arriving from Turkey in rafts and leaky boats. What he finds is an island full of old secrets dating back to the days when island-based Turks were forced to return to Turkey, leaving behind homes and farms. And in the present, islanders are keeping secrets, primarily sexual ones. Even the most casual of characters come alive, from the handsome priest with a trade in fake icons to the Albanian waiter desperately in love with his boss’s daughter. That’s Smith’s greatest talent—in addition to a page-turning plot, he makes the lives of these people on this tiny rock in the Aegean meaningful to us." —Neil Plakcy, author of the award-winning Mahu Investigations

“Smith’s compelling page-turner, Fire on the Island, offers plentiful helpings of captivating mystery and intrigue with rich family history and exciting romantic adventures....The mystery surrounding the fires and determining who may be responsible makes for a fascinating escapade that delves into the town’s history and provides intimate portraits of each potential culprit. Meanwhile, the everyday antic and daily trials and tribulations of the community’s members are equally engaging....Fire on the Island introduces readers to a small but complicated universe with colorful characters for a thrilling, memorable adventure in an exotic locale.” --Edge Media Network

Tim has traveled the world collecting stories and characters for his novels and screenplays which have received high praise. Fire on the Island won the Gold Medal in the 2017 Faulkner-Wisdom Competition for the Novel. He won the Paris Prize for Fiction for his first book, A Vision of Angels. Kirkus Reviews called Cooper’s Promise “literary dynamite” and selected it as one of the Best Books of 2012. Tim was nominated for the 2017 Pushcart Prize for his short fiction, "Stolen Memories." His screenplays have won numerous international competitions. Tim is the founder of the Smith Prize for Political Theater. He lives in France.
Loading...
or support indie stores by buying on