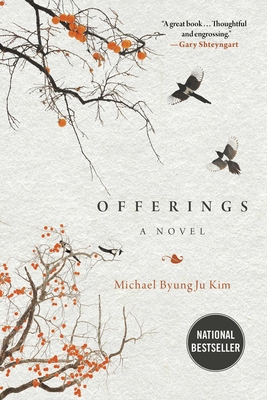 The national bestseller that Gary Shteyngart has called, "A potent combination of a financial thriller and a coming-of-age immigrant tale. . . . Offerings is a great book."

With the rapidly cascading Asian Financial Crisis threatening to go global and Korea in imminent meltdown, investment banker Dae Joon finds himself back in his native Seoul as part of an international team brought in to rescue the country from sovereign default. For Dae Joon—also known by his American name of Shane, after the cowboy movie his father so loved—the stakes are personal.

Raised in the US and Harvard Business School–educated, Dae Joon is a jangnam, a firstborn son, bound by tradition to follow in the footsteps of his forebears. But rather than pursue the path his scholar-father wanted, he has sought a career on Wall Street, at the epicenter of power in the American empire. Now, as he and his fellow bankers work feverishly with Korean officials to execute a sovereign bond offering to raise badly needed capital, he knows that his own father is living on borrowed time, in the last stages of a disease that is the family curse. A young woman he has met is quietly showing the way to a different future. And when his closest friend from business school, a scion of one of Korea's biggest chaebol, asks his help in a sale that may save the conglomerate but also salvage a legacy of corruption, he finds himself in personal crisis, torn by dueling loyalties, his identity tested.

Praise For Offerings: A Novel…

"A potent combination of a financial thriller and a coming-of-age immigrant tale, Offerings is a great book. A thoughtful and engrossing read."—Gary Shteyngart, award-winning and New York Times bestselling author of Lake Success

“Michael Kim writes with the authority of an insider on the intricate workings of Wall Street and the high stakes for Korea during the Asia Financial Crisis, but at its core Offerings is a moving love story—about a young man’s love for his home country, his father and his newfound soul mate. Offerings is an elegant poem on the redemptive power of love.”—Sandy Weill, chairman emeritus of Citigroup and bestselling author of The Real Deal: My Life in Business and Philanthropy

"In clean, elegantprose, Michael Kim plumbs the complicated world of international finance—and the universal longing of fathers and sons not to disappoint one another. Offerings is the engrossing tale of an immigrant's troubled return home."—Elizabeth Cobbs, New York Times bestselling author of The Hamilton Affair and The Tubman Command

"This is a brilliant novel about a critical turning point both in a man's life and in his country of origin. The author, who was born in South Korea but lived much of his childhood in New Jersey, writes with rare clarity and great authority about high finance, the concept of home, and, most importantly, lessons learned from and redemption achieved with a beloved father ."—Nick Lyons, professor of English, Hunter College (retired), and bestselling author

“If you want a look at a world you have never seen and appreciate rock-ribbed drama, then Offerings is that surprising item, a book that is at once new and fascinating.”—Craig Nova, author of  The Good Son

Michael ByungJu Kim is a financier, philanthropist, and author. He has more than thirty years of experience on Wall Street, in investment banking and in private equity. Offerings is his first novel. He grew up in Seoul, Korea, was educated in the United States, and currently works in Seoul and Hong Kong. He has two sons working and studying in the US. He lives with his wife of twenty-eight years in Seoul.
Loading...
or support indie stores by buying on