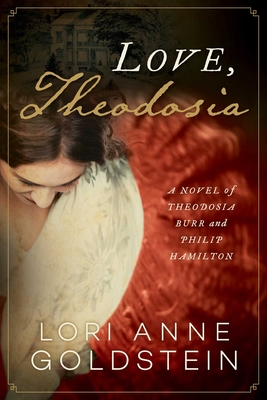 A Novel of Theodosia Burr and Philip Hamilton

In post-American Revolution New York City, Theodosia Burr, a scholar with the skills of a socialite, is all about charming the right people on behalf of her father—Senator Aaron Burr, who is determined to win the office of president in the pivotal election of 1800. Meanwhile, Philip Hamilton, the rakish son of Alexander Hamilton, is all about being charming on behalf of his libido.
When the two first meet, it seems the ongoing feud between their politically opposed fathers may be hereditary. But soon, Theodosia and Philip must choose between love and family, desire and loyalty, and preserving the legacy their flawed fathers fought for or creating their own.

Love, Theodosia is a smart, funny, swoony take on a fiercely intelligent woman with feminist ideas ahead of her time who has long-deserved center stage. A refreshing spin on the Hamiltonian era and the characters we have grown to know and love. It’s also a heartbreaking romance of two star-crossed lovers, an achingly bittersweet “what if.” Despite their fathers’ bitter rivalry, Theodosia and Philip are drawn to each other and, in what unrolls like a Jane Austen novel of manners, we find ourselves entangled in the world of Hamilton and Burr once again as these heirs of famous enemies are driven together despite every reason not to be.

Praise For Love, Theodosia: A Novel of Theodosia Burr and Philip Hamilton…

"This Romeo and Juliet story for Hamilton fans imagines what might have happened if Theodosia (daughter of Aaron Burr) and Philip (son of Alexander Hamilton) fell in love, despite the very public animosity between their fathers. . . . Goldstein’s adult historical debut depicts an admirable heroine in Theodosia, an academic prodigy, a supporter of abolition and women’s suffrage, a dutiful daughter, and a passionate woman, that makes for an interesting reimagining of a notable historical figure." -- Library Journal

"With Love, Theodosia, Lori Goldstein leaps from YA novels to adult historical fiction with aplomb. In Theodosia Burr she has created a unique and resourceful young woman able to take on the machinations of the fraught 1800 presidential election, explore flawed characters (her own father, Aaron Burr, for one) and come to terms with what it means to love and forgive . . . and love again.”--Sally Cabot Gunning, author of Monticello: A Daughter and Her Father, and Painting the Light

"The novel’s got a great plot and fascinating information about the politics of the young United States ...I enjoyed reading it. The only other novel I know of that features Theodosia Burr came out in 1941 (My Theodosia by Anya Seton). I’m glad to seeTheodosia once again step forward from the historical shadows to tell her own story."--Historical Novel Society

“Love, Theodosia is a fascinating tale of young lovers struggling to escape the gravitational pull of history itself--and the magnetic fathers who will not let them go.”—Elizabeth Cobbs, author of the bestselling novel, The Hamilton Affair

“Clever and spirited writing makes this novel wholly entertaining and captivating, with characters brimming with witticisms and a plot teeming with potential scandal that had me desperately rooting for Goldstein's imagined star-crossed lovers of Theodosia Burr and Phillip Hamilton. Fans of Bridgerton will delight in this high-society romp.”—Jenni L. Walsh, author of Becoming Bonnie and A Betting Woman

“‘Nothing had ever been so simple. Nothing would ever be as complicated. Perhaps that was how the best love stories began.’ And so readers will fall in love with star-crossed Theodosia Burr and Philip Hamilton as they fight for a happiness that was never meant to be. Exquisitely researched yet tenderly layered with romantic what-ifs, this is the story I never knew I needed.”—J'nell Ciesielski, bestselling author of The Ice Swan

Lori Anne Goldstein is a creative writing instructor, manuscript consultant, and the author of four novels for young adults. She credits her BA in journalism with giving her the skills and desire to conduct the extensive research that forms the core of her adult historical debut, Love, Theodosia.  She is the author of four YA novels, BECOMING JINN, CIRCLE OF JINN, SCREEN QUEENS, and SOURCES SAY., She lives in the Boston area and can be found online at www.lorigoldsteinbooks.com, on Instagram at @lorigoldsteinbooks, on Twitter at @loriagoldstein, and on Facebook at LoriGoldsteinAuthor.
Loading...
or support indie stores by buying on